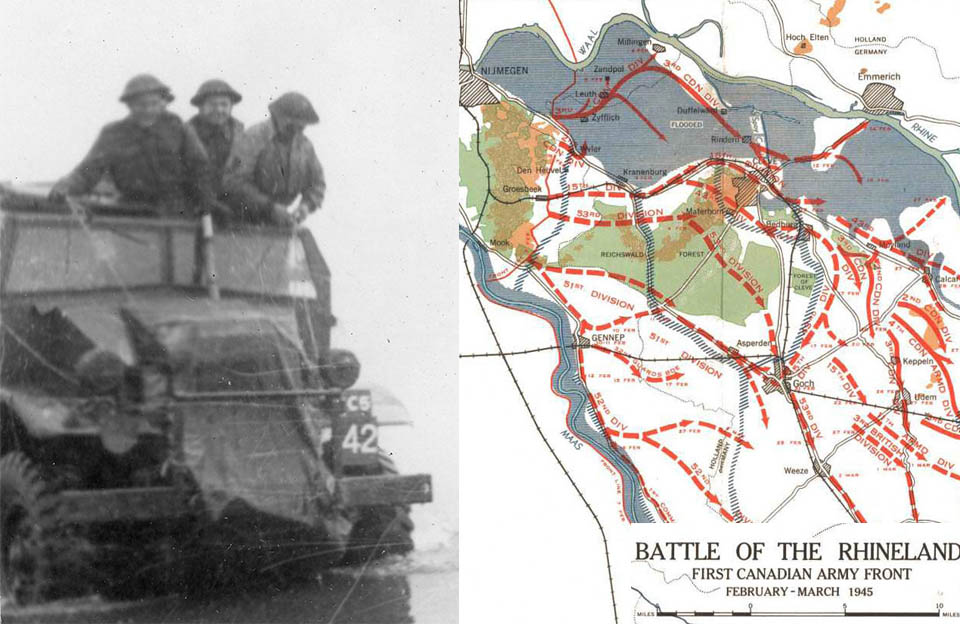 February 2nd, 1945 – Orders were given for the Regiment to stay off the roads between 18:00 and 6:00 hours. The build-up for a major attack was beginning.

February 6th, 1945 – Operation “Veritable” was announced. There were 1045 guns prepared to fire. The 3rd Division, including the 12th Field, was located in the area between the Cleve Road and the Rhine.

February 8th, 1945 – The attack began with a huge salvo from the guns including those of the 12th Field Regiment. This was the first time shells landed on Germany and the 12th fired 600 rounds per gun.

The 7th Brigade in the afternoon received support from the 12th, and a Battery was deployed in Germany which was the first Canadian Battery to be deployed and fire in Germany.  The Regina Rifles and the Canadian Scottish got their objectives and the Winnipeg Rifles embarked on Buffaloes to get to the Rhine and the Seigfried Line.

Excerpts from ” Into Action with the 12th Field ” :

On February 5th the GOC, Maj-General D. C. Spry visited the Regiment and spoke to the men. He emphasized the prominent part the Artillery was to play in the forthcoming operation. Every large scale attack we had taken part in had been preceded by a tremendous show of fire power and this was to be no exception. In fact, this was to be the biggest yet! The Divisional Artillery of the 2nd and 3rd Canadian Divisions, the 15th Scottish Division, the 43rd British Division, the 1st Highland Division, the 53rd Welsh Division and the Guards Armoured Division plus five Agra groups were to participate. One thousand and forty five guns were to speak prior to the attack and no German who heard or felt the impact of that barrage will ever forget it.

The plan roughly was first to capture the Reichwald, then Cleve and Goch. With this firm base the armour was to break out and race down the west bank of the Rhine to meet the American 9th Army who were preparing an attack in concert with ours. The 30th British Corps had the job of capturing the Reichwald after a Brigade of the 2nd Canadian Division captured Wyler. The 3rd Division, after Kranenburg and the high ground before Cleve was taken were to clear north of the Beck-Cleve highway to the Waal. It required an amphibious operation because on February 7th the Germans blew the dikes and flooded the area we were to attack. Not for nothing had the 3rd Division been renamed the “Water Rats” and it was practically second nature for us to take to “Buffaloes” and the “briny” once again.

On February 6th the “traces” for the fire plan for operation “Veritable” were received and it was the biggest plan of which we had ever been part. The Command Posts spent a busy forty-eight hours in preparation and there was the normal briefing of all Officers. The FOO’s and Company Commanders had their briefing in a special “I” room at Division where there were large scale maps and air photos. According to recent intelligence there were some three hundred and eighty guns on our front and counter Battery was to engage every known gun position in the whole area.

At 2200 hours on February 7th the first phase of the operation started with the bombing of Emmerich, Cleve, and Goch by ……

Feb 4 : man whom they brought back. The GOC Twill pay a short visit to the Regiment to-morrow he wants to speak to as many men as possible. Five Weasels will have to be picked up at GRAVES to-morrow morning, our Part X Orders will not be amended accordingly. We had very good weather to-day and a little frost at night. Visibility good.

Feb 5: Weather still not good, low clouds and frequent rain. The GOC was around in the morning at about 1010 hrs and spoke to about 350 men. He emphasized the part Arty Was to play in the coming operation and generally bucked our spirit up„ Weasels arrived OK and are being fitted up as OP vehicles immediately. We lost two more trailers to-day to 9 CIB, one from RHQ and one from the 43rd Bty. Had a special HF target starting at dark on a dyke junction 793628 to prevent Jerry blowing it and flooding the ground EAST of 7 Bde. Our Corps HF’s were cancelled to allow us to fir this. No other firing duri the day except one SHORT on 778598. We reported ready in 3 minutes and fifty seconds, (11 – 3.50, l6 – 3.10, 43 – 3.45) beating the 13th Field by almost two minutes. (5.30).

Feb 6: LO to Div in morning to pick up traces for Op VERITABLE”. Adjt busy 7 most of the day correcting same for amdts etc. The HF on the dyke junction previous night was cancelled early in the morning to all bde to see if they could snaffle a couple of prisoners. No further report on this and HF was resumed at 0600 hours. Received 20 rounds of Super-charge for ourselves, unloaded a lot for the English troops. They (the English) are in our RHQ 2 or 3 times as a day trying to borrow vehicles, rations, etc. We are beginning to wonder whether we are getting a reputation for helpfulness. A Johnny from 2 Div area was down to-day asking us for 3 60cwts. He got them from the 4th Fd. Grand day for the Airforce but they did not seem to be very busy above us. Some tiffies in action over the island. A quiet day on the ground. The usual HFs at night, Col WEBB has left complete with retinue for 7 CIB. It started to drible rain again in the evening.

Feb. 7: A restriction on all movement of vehicles to-day caused the 2 i/c a major headache this morning. Eventually, by arranging convoys to the water and the ration point and starting 2 and 3 vehicles out an one ticket, the problem was solved. The FOOs

Feb 7-cont.: were up to the infantry during the day. Capt DACK of the 16th Bty threw a track on his weasel which was not replaceable so the LAD went to work and managed to patch it up by 2200hrs. The RAF was over in strength at 2200 hrs. Continued till about 2 in the morning. BBC report an attack of 700 planes on targets between the MAAS and the RHINE. Weather during the day was bad but a clear night – moon. All preparations for operation VERITABLE finally completed.

Feb. 8: Today was “D” day for operation “VERITABLE”. Guns started firing at 0800 hrs on a timed programme in support of “30th Corps”. Cease firing at 0950 hrs. Started a smoke screen on the left of 30 Corps front at 1015 and continued same till 1600. Reverted to normal role in support of the 7 CIB and was ready to engage targets on call. 7 CIB commenced to move at 1800 hours. Regt moved to no position at BEEK by Batteries. Move completed by 1200 hrs. One of the troops of the 43rd have guns in GERMANY. The advance is going well in spite of bad weather – rain which does not improve the flood conditions.

Feb. 9: Guns firing numerous targets in support of the Scottish and the RRs. Winnipegs have not been committed yet. The attack is still going well. Major MORISON is killed when the buffalo he is in with the Col of the SCOTS is hit by a bazooka near ZYFFLICH. Both 7th and 8th Bdes have reached their objectives. Some mopping up yet to be done. The Luftwaffe was over in the evening. A few bombs dropped by not near us. Most targets are out of range for us now in present position. Flooding makes a move temporarily impossible. Weather was good to-day, a change for the better.

Feb. 10: Attack going well, no trouble with enemy as they are all under water. Buffaloes doing a good job. Very little fire being called for by FOO’s. Reports are coming in that he German civilians left are treating our troops very veil. RWR’s have returned to our area again. They had little or no opposition. The weather still is unfavourable. The artificial moonlight is very effective with these low clouds. All infantry reached their objectives.