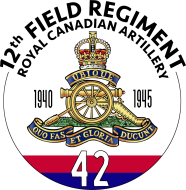 They say ” once a Gunner, always a Gunner “.  A bond exists between the men who served under the Royal Canadian Artillery that is rarely mentioned and even less known.  A brotherhood hard worn by metal, smoke & fire without whom the war would simply not have been won.  The fear the enemy suffered at some of the most important battles in history was induced & dictated by our very own Canadian Artillery Regiments.

The following is a telling of the untold story of the 12th Field boys and men who left their homes, families and friends to train, fight and often die for the free world we now take for granted.  Every breath we take honours their efforts and sacrifices.  We must & always remember.

Nations came together standing strong against tyranny in honour of the principle that anyone is this world’s citizen that they have the right to their freedom.

It is our duty and responsibility to honour them, remember their lives and sacrifices.

The 12th Field Regiment compiled by Bob McEachern from the book Into Action with the 12th Field written by Captain T-J. Bell, 1945 and supplemented with information from various other sources. link to read the transcript >>