Mobilization and Training in Canada- 1940 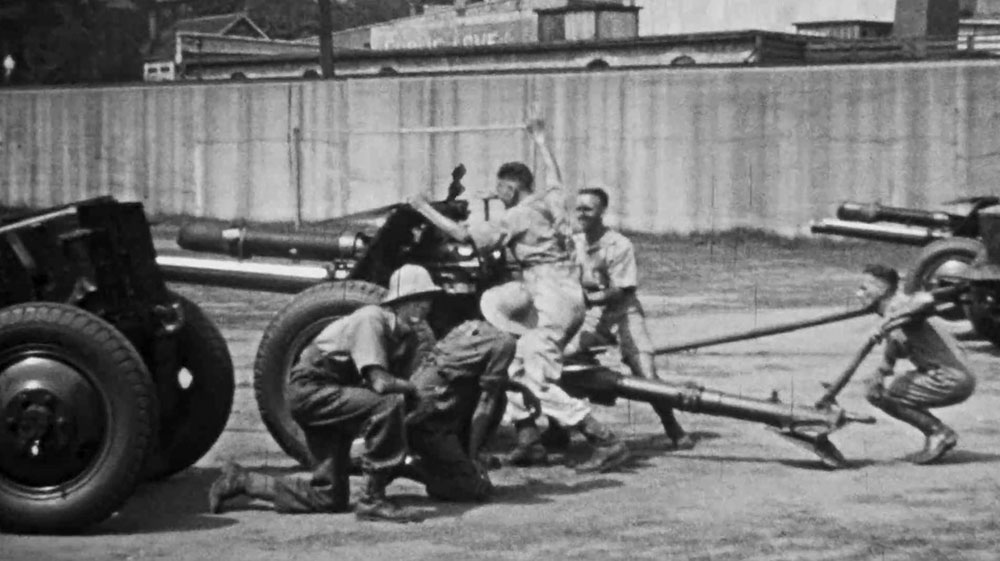 Mobilization and Training in Canada – 1940
Excerpt: Into Action with the 12th Field

There were four Batteries in the original organization of the 12th Canadian Field Regiment. They were all NPAM Batteries, the 16th and 43rd from Guelph — part of the 11th Field Brigade, the 11th was from Hamilton and the 69th from Brantford. Thus, when the mobilization order came, it was not a question of starting from scratch, but it was rather of implementing and strengthening the NPAM organization — of course from volunteers.
On the 27th of May, 1940 Major O. M. McConkey was given the job of mobilizing the 16/43rd Battery. The Major was a veteran Gunner of the last war and the men recruited were chosen with great care. It took a month to complete recruiting and by July 1st training had begun and was in full swing a week later.
The 11/69th Battery began their recruiting on the 29th of May 1940 under Major J. P. Phin, who later commanded the Regiment in England and the 3rd Canadian Anti-tank Regiment in action, and was completed on the 18th June. The Batteries were entirely separate for the first two months of their training and each consisted of three troops — the 11/69th had D, E and F Troops, the 16/43rd — A, B and C Troops. 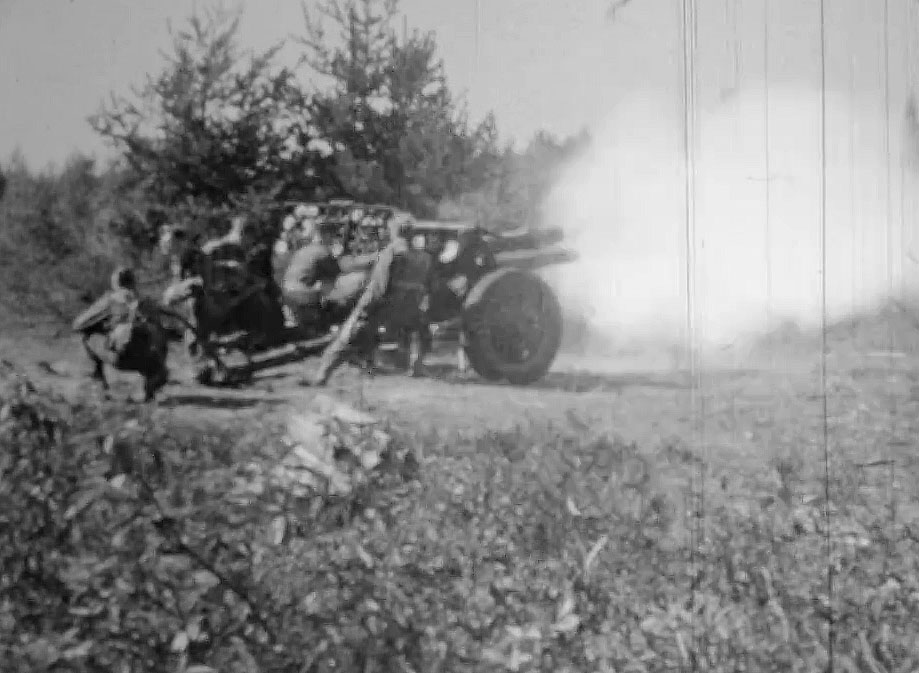 The training in July and August of 1940 was very elementary — foot drill, small arms drill, standing gun drill and some gunnery. The 11/69th had only one 18-pdr and one 4.5 How and very little equipment aside from their uniforms. They moved to Petawawa at the end of July and sand bags carried what little personal equipment the men had. The 16/43rd fared somewhat better and had nine 18-pdrs — the fact that one gun carriage had been carrying important bodies from the church to the cemetery did not dampen the enthusiasm with which the Gunners learned their gun drill. This Battery had a complete issue of kit before they finally left for Petawawa on Labour Day. By this time both Batteries were ready for more advanced training. Very shortly after their arrival on Sept 6th, 1940, the two Batteries joined forces to form the Regiment with Lt-Col G. T. Inch in command and Major Phin as 2 i/c. Major McConkey retained command of the 16/43rd and Major W. J. Brigger took over the 11/69th. The stay in Petawawa was not a long one but it was certainly crowded with activity. 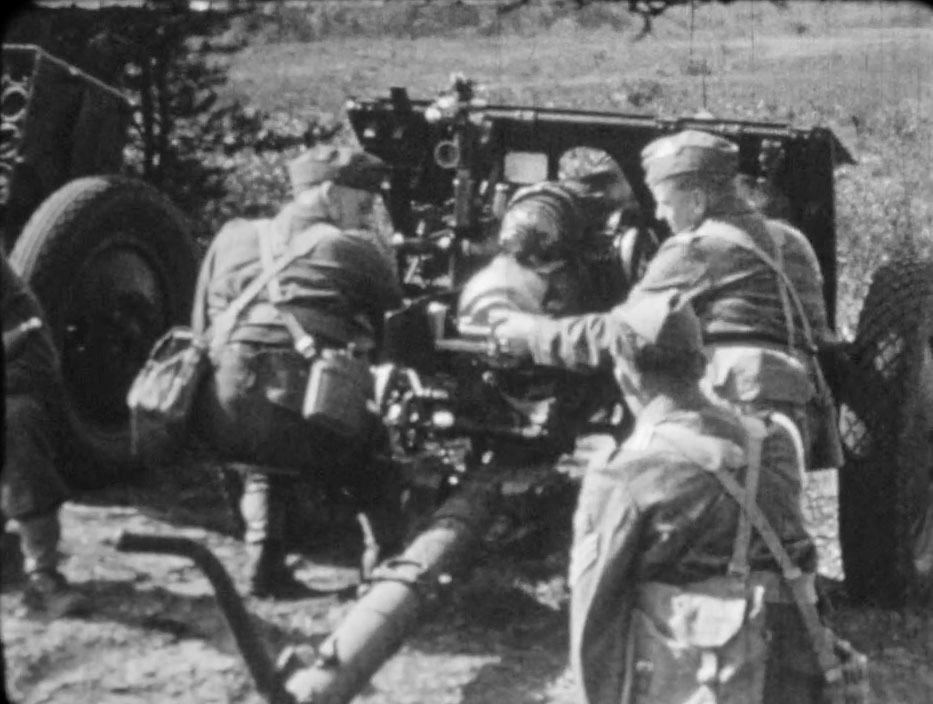 Here the Regiment began to take shape. Personnel were fitted into their War Establishment jobs, and gun quads, trucks, and motorcycles became familiar weapons. There were dismounted manoeuvres on foot, with gunners feeling very foolish, bearing great placards “GB” or “TLE”, and one full-scale Regimental scheme. The signallers began to train in earnest, although picking blueberries was often combined with buzzer practice. Gradually, the Regiment took form and the men began to see how each and everyone fitted into the general picture.

The Gunners quickly became familiar with their own respective jobs and the first live shoot took place here. It was under rather inauspicious circumstances as the shoot was on a Saturday,

when most of the experienced gunners were away on week-end. There were four 18-pdrs and each Troop in turn manned the guns. The remaining men were divided into three classes: (1) the men who had Militia training and had fired a gun, (2) men who had seen a gun but never fired one, (3) men who had never even seen a gun; and by combining them roughly in proportion the shoot went off fairly well. The officers took over for the last shoot and if you happened to ask B. S. M. Snider about that shoot you would be assured of one half-hour’s solid amusement.
It was truly an amazing thing the amount of trouble that Gunners, and that includes everyone, could get into on deployments and live shoots. A whole book could be written on the “faux pas” and the troubles into which the Regiment has gotten, but fortunately for us once we got into action they seemed very largely to disappear. Of course, in action, we didn’t have the Safety Officers to bother us and there was the odd rather unusual occurrence, such as a Number One of A Troop firing a shell at Caen with the ejector still on its nose. That must go down in history as anyone who heard it must agree. The sound was even more terrifying than the sound of the “Dover Express” shells at Wissant which went over our heads in the other direction at regular intervals — thanks to our Happy Valley. However, as far as the Officer’s shoot at Petawawa was concerned, we will leave it with the comment that there was a slight mix up in aiming posts and was there ever a Gunner who didn’t have the same trouble?

The 11/69th Battery Tug-of-War team on the championship at Petawawa that summer and on October 3rd the Regiment left by road and rail for Camp Sussex, New Brunswick. Unfortunately, the camp did not appear to be ready to receive the Regiment (they never are) and camping under canvas combined with the terrible weather to make things extremely uncomfortable. The weather was very cold and it became necessary to go to bed with everything a Gunner owned on top of him including his boots. 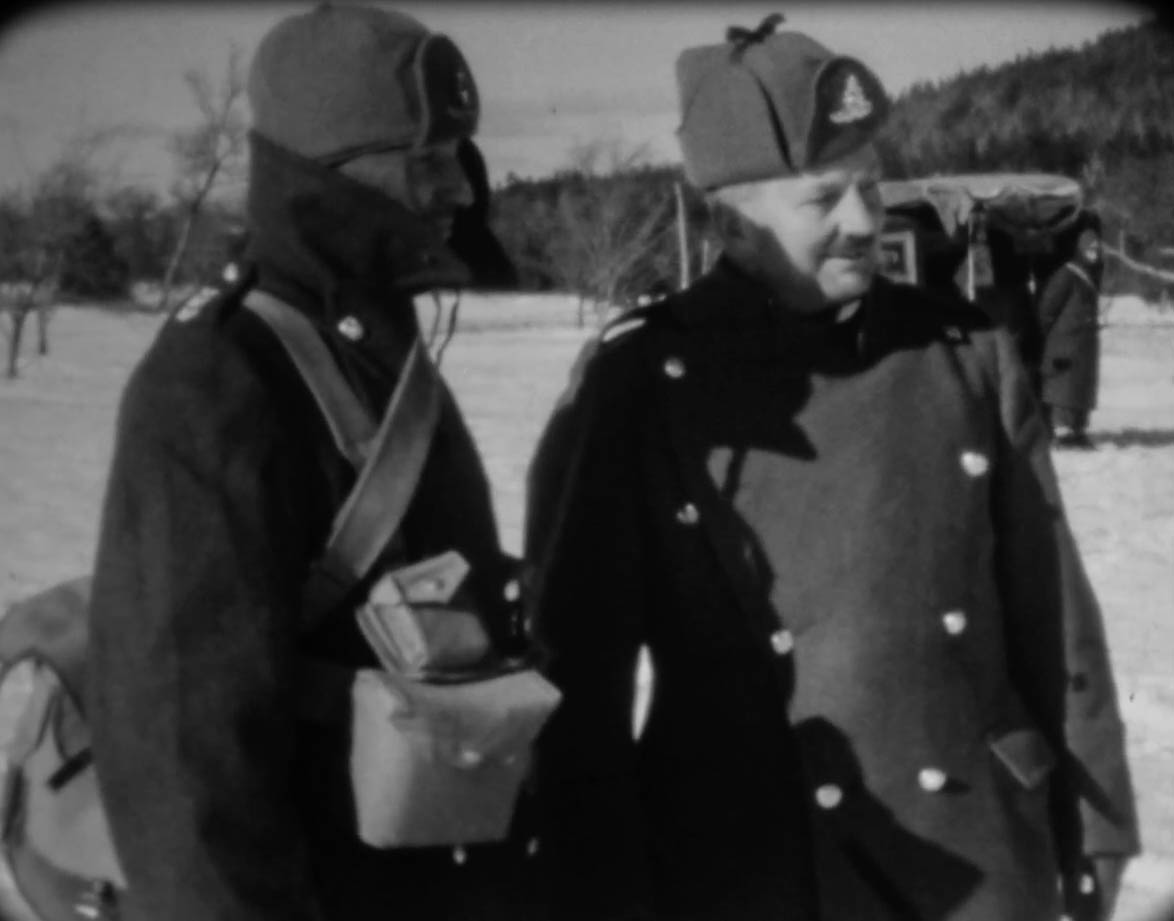 The drill for getting up was rather complicated but everyone survived. The Regiment was quickly organized into gangs of carpenters, electricians and road builders, and with the weather as an incentive, it wasn’t long before the huts were ready for occupation. The Regiment became part of the 3rd Canadian Infantry Division and formed, along with the 13th and 14th Field Regiments, the 3rd Anti-tank Regiment and later the 4th Light Ack-ack Regiment, the Divisional Artillery. The Division was to win immortal fame on the beaches of Normandy and in their later operations, but for the Regiment, inclusion in a Divisional structure was only the first sign of greater things to come.

New equipment was issued here and manoeuvers were the order of the day, Training was very intensive and the Regiment was attached to the 8th Canadian Infantry Brigade. There was a great deal of rivalry between the various Infantry Battalions and the Artillery in the field of sport, and in fact the rivalry extended even further. This latter rivalry reached its climax the night of January 19th, 1941 when a “Battle Royal” developed between the Regiment and the Regiment-de-La Chaudiere. It was a riot which all the Officers and WO’s were unable to quiet or stem until it had run its victorious course. Gnr Elgie of the 43rd Battery provided the best show of all for when one less enthusiastic Chaudiere tried to escape his punishment by jumping in the river, he followed. He was last seen standing waist deep in water — his arms extended and dangling from each was a very uncomfortable Chaudiere. They were very systematically being dunked and the sight was enough to cool the fighting spirit of the most ardent of the enemy. They retired ungracefully from the arena and from that time the Regiment “ruled the roost” in Sussex town. 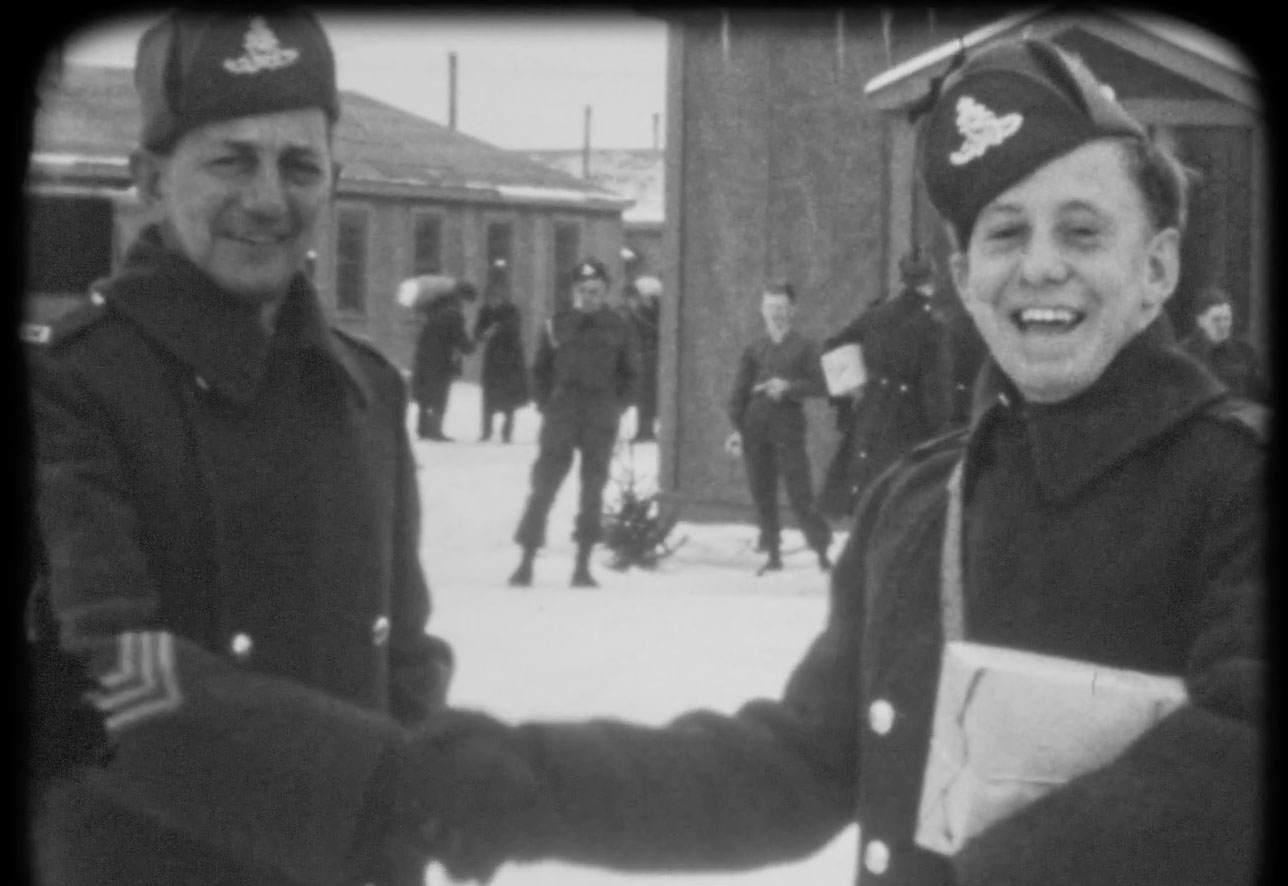 The training and discipline at Camp Sussex became more severe and this no doubt was responsible for the gathering support and strength of the famous GPA (Gunner’s Protective Association). No one who has ever run afoul of this organization has any reason to believe it a myth, although its activities were inevitably shrouded in mystery and it usually took the victim some time to realize that he had been victimized.
Guards were mounted with impressive ceremony including a brass or trumpet band. One evening the guard was remounted five times so Major McConky could hear the trumpets. He claimed it was perfect but the comments of the guard will not be included.

The Christmas season 1940 was the occasion of the first furlough for the Regiment. Half the men were away for Christmas and the remainder for New Years. The winter went very quickly — with map schemes over Piccadilly Mountain, courses in Infantry manoeuvres, and TOET’s. Trade tests were given to all personnel of the unit. This training did a great deal to broaden the men’s general knowledge of military and fie1d tactics, nor was field engineering over-looked.
The guns of the Regiment still consisted of 18-pdrs and 4.5 Hows and it was not until the end of May that there were twenty four 18-pdrs in the Gun Park. The signallers had No. 11 sets, buzzer, semaphore, and line procedure to keep them busy and the Gunners always had fire discipline, gun drill and laying to think about, not to mention countless other things. It was a tough winter and two things which stood out were the famous Stand-to’s, (on one occasion of a Stand-to at 0200 hrs in the morning every vehicle was found to be frozen in solid) — and the mud. It has been said that the mud at the cross roads by the Post Office was so deep that all you ever saw of a DR at that corner was his hat — but at least you knew where he was!
In February the Regiment was reorganized to conform to the new War Establishment and the 69th Battery left the Unit to form part of the 4th Light Ack-ack Regiment. They took 25 NCO’s and 25 men from the 11/69th Battery and it was a serious drain of well trained men. 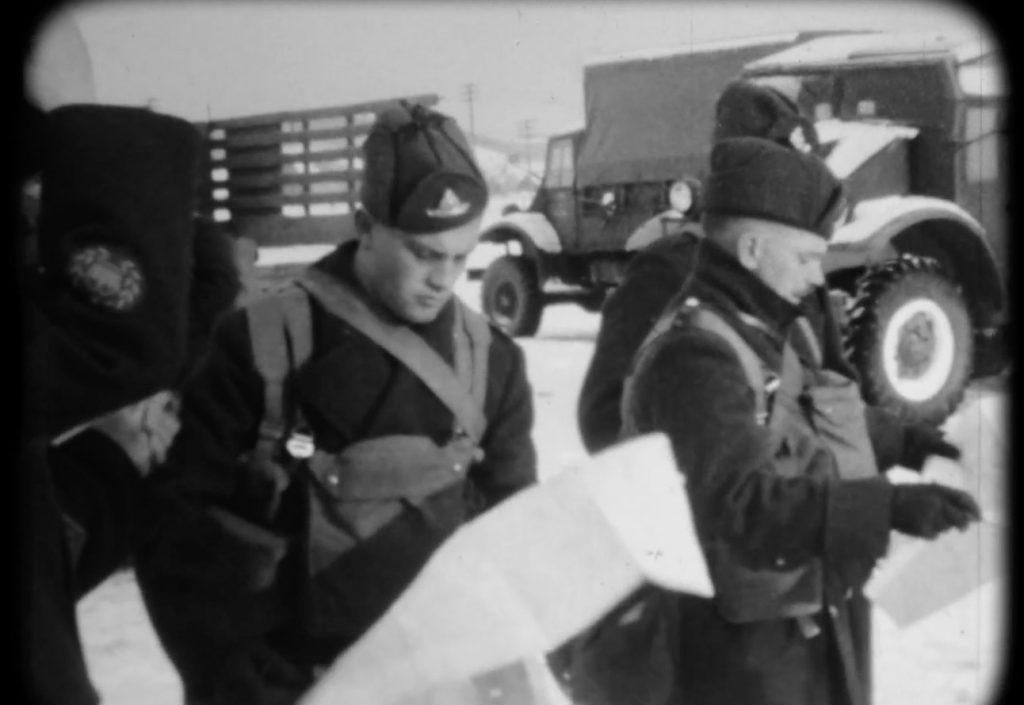 The Regiment was now to consist of the 11th, 16th and 43rd Batteries and RHQ — each Battery having two Troops of four guns each.

For five weeks all MT was grounded — the snow was so deep, and during this time classroom training took over. All instruction was provided by the Unit’s own Officers. Most of the knowledge came from pamphlets (need we say more!) as up until this time very few courses were available for instructors. 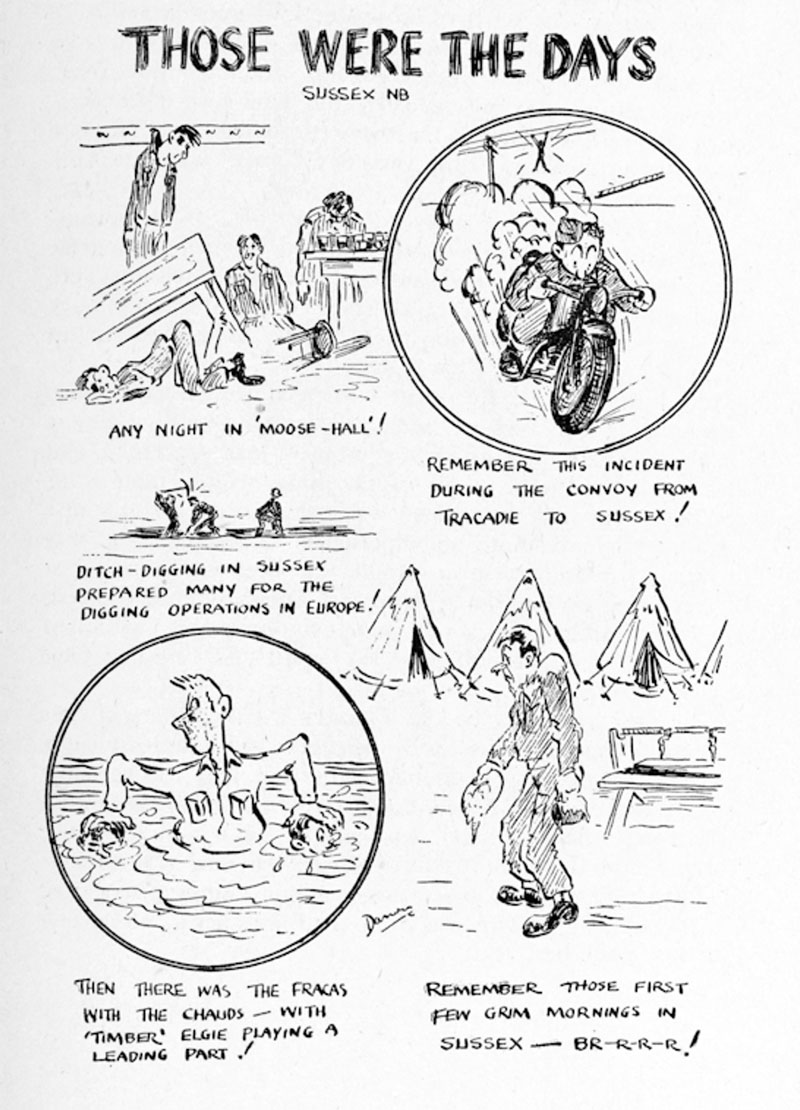 Easter leave provided a record number of AWL’s. Fortunately the CO took a fairly lenient view of the affair but a great deal of pay went west nevertheless. The spring months were filled with Battery and Troop schemes and there was a famous tour of northern New Brunswick by one Battery to stir up interest in the current Victory Loan.
On June 21st the Regiment convoyed to Tracadie, New Brunswick for a week of firing practice. It was now almost at War Establishment, as far as equipment was concerned, and this week was to be proof of the long winter months of training. Fire and movement was experienced for the first time and it was quite an experience! The Regiment was invariably moving when it should have been firing and when it was firing no one dared to move! The Governor-General, the Earl of Athlone, visited the gun positions and also witnessed the fall of shot in shoots fired by Capt E. S. Tate and Capt A. G. Goldie.
The flies were very had at Tracadie and no one will ever forget “Tobacco Road” and the figure who unfortunately had her feet pointing in the wrong direction. It was certainly not the spot to choose for a home, so it was with great enthusiasm that the Regiment received its sailing orders. The convoy from Tracadie to Camp Sussex was one of the fastest in history. Embarkation leave — 48 hours at home, started on July 6th, for many it was to be their last chance, and everyone made the best of it. 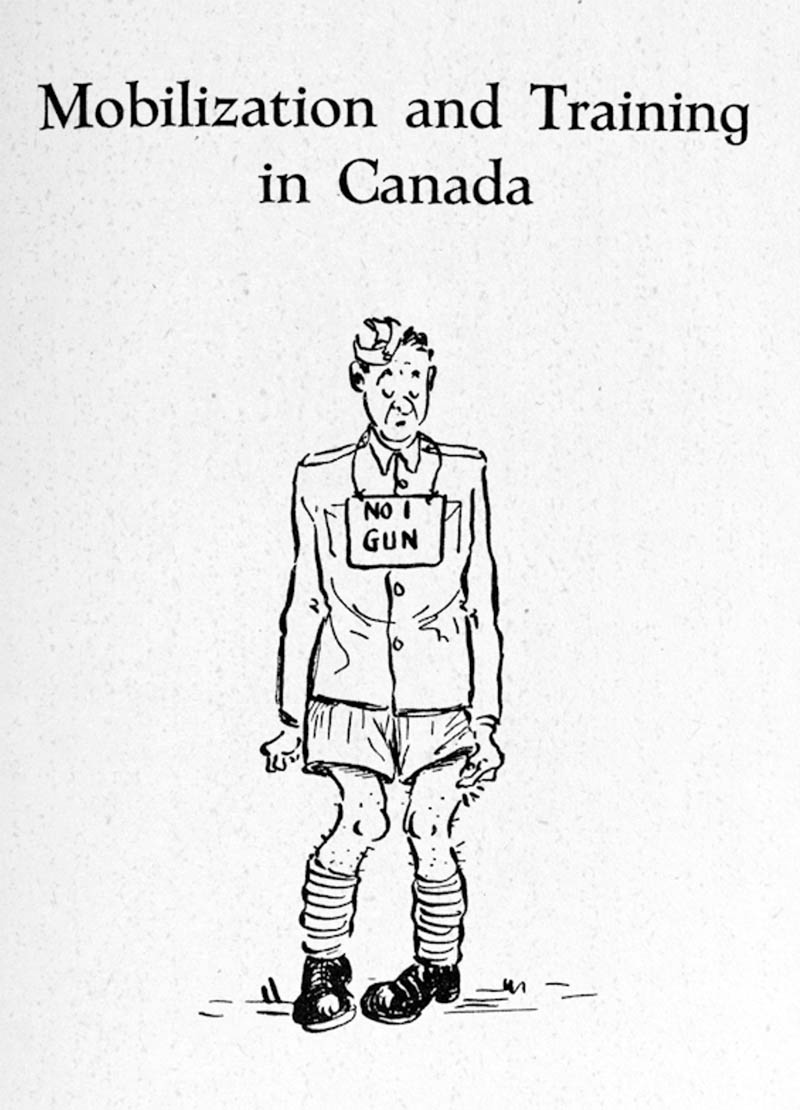