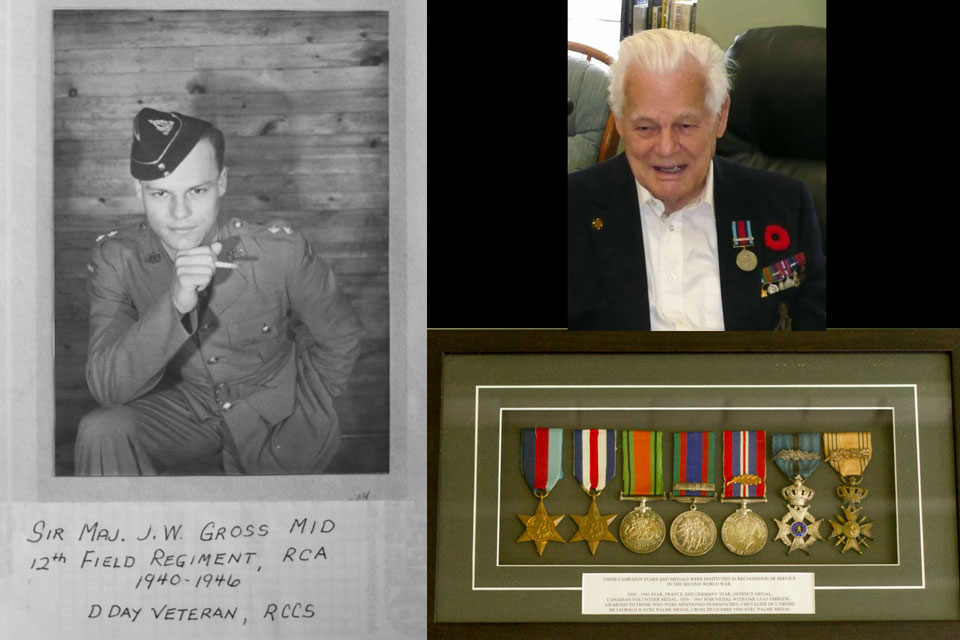 John passed peacefully, at home in Port Elgin, with family by his side, on Thursday, April 14, 2016, in his 97th year; the loving husband of the late Margaret (nee Guymer). He will be missed by his family and friends.

Major John W. Gross was knighted by King Leopold II of Belgium with the Cross of War.

Published article January 20, 2015 ( Shoreline Beacon )
PORT ELGIN ­ Decorated war veteran John William (Jack) Gross, 95, received the heartfelt thanks of a grateful nation, and the warm applause of his friends at a Jan. 19 ceremony in Port Elgin, when he accepted a special commemorative lapel pin and certificate of recognition marking Canada’s engagement in WWII.
Major Gross, born in Kitchener, joined the reserve army as a 16­ year­ old in 1935 and was a sergeant when war was declared.He was a signal officer with the 12th Field Regiment, Royal Canadian Signals Corp, and then assigned to the 9th Canadian Infantry Brigade until the war ended. His heroic exploits earned him a Knighthood from Leopold II of Belgium, who awarded him the Cross of War for courage and bravery during the Battle of the Scheldt. Gross is the uncle of Canadian actor/director, writer Paul Gross who in 2008 produced Passchendaele, a WWI drama based on his maternal great­ grandfather’s war experiences. Paul Gross latest Film is ” Hyena Road “. 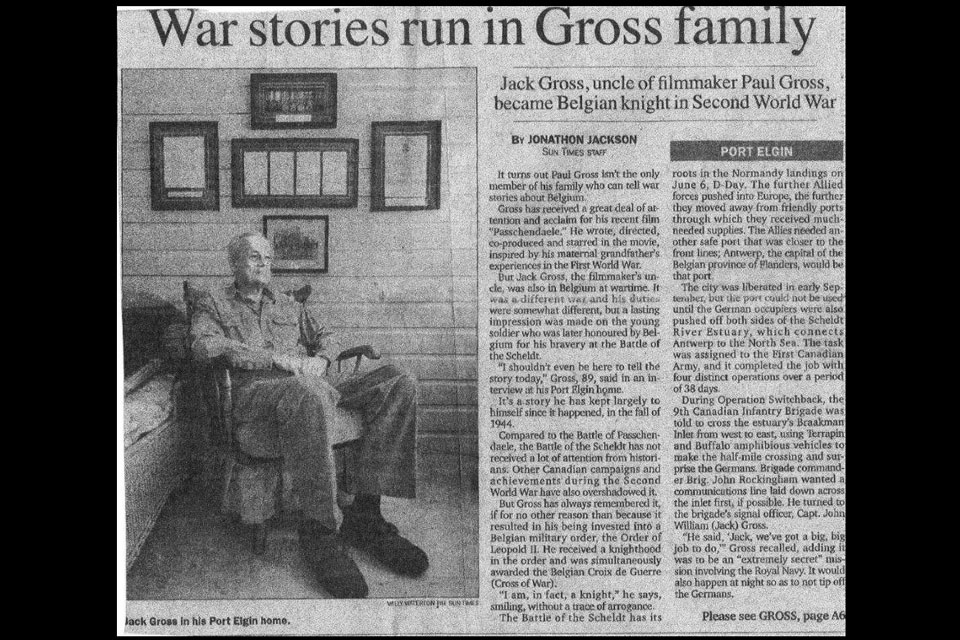 ……Compared to the Battle of Passchendaele, the Battle of the Scheldt has not received a lot of attention from historians. Other Canadian campaigns and achievements during the Second World War have also overshadowed it.
But Gross has always remembered it, if for no other reason than because it resulted in his being invested into a Belgian military order, the Order of Leopold II. He received a knighthood in the order and was simultaneously awarded the Belgian Croix de Guerre ( Cross of War ).

“ I am, in fact, a knight “ he says, smiling, without a trace of arrogance.
The Battle of the Scheldt has its roots in the Normandy landings on June 6, D-Day. The further Allied forces pushed into Europe, the further they moved away from friendly ports through which they received much needed supplies. The Allies needed an other safe port that was closer to the from lines; Antwerp, the capital of the Belgian province of Flanders, would be that port.
The city was liberated in early September, but the port could not be used until the German occupiers were also pushed off both sides of the Scheldt River Estuary, which connects Antwerp to the North Sea. The task was assigned to the First Canadian Army, and it completed the job with four distinct operations over a period of 38 days.

During Operation Switchback, the 9th Canadian Infantry Brigade was told to cross the estuary’s Braakman Inlet from west to east, using Terrapin and Buffalo amphibious vehicles to make the half-mile crossing and surprise the Germans. Brigade commander – Brigadier John Rockingham wanted a communications line laid down across the inlet first, if possible. He turned to the brigade’s signal officer, Captain John William ( Jack ) Gross.
“ He said, “ Jack, we’ve got a big, big job to do, “ Gross recalled, adding it was to be an “ extremely secret “ mission involving the Royal Navy. It would also happen at night so as to not tip off the Germans…. “

The Royal Canadian Signal Corps were responsible for establishing and maintaining communications between the front lines and any of several levels of command. Using a combination of wired and wireless communication and messages carried by dispatch riders (Don R’s) on motorcycles, orders, progress reports and fire control (ie., the aiming of artillery shells, mortar shells and even aircraft bombing) was maintained. Forward observation crews included a ‘Sig’ who was responsible for the communications. Sometimes it was the Engineers who strung the wires through hostile territory, but the Sigs were the ones to operate them.
In this example, Major Gross was called upon to oversee the establishment of a line for communication through some hostile territory, under heavy secrecy.
The Sigs were closely linked to Artillery Regiments and the 12th Field, at various times, supported the 7th, 8th and 9th Infantry Brigades.