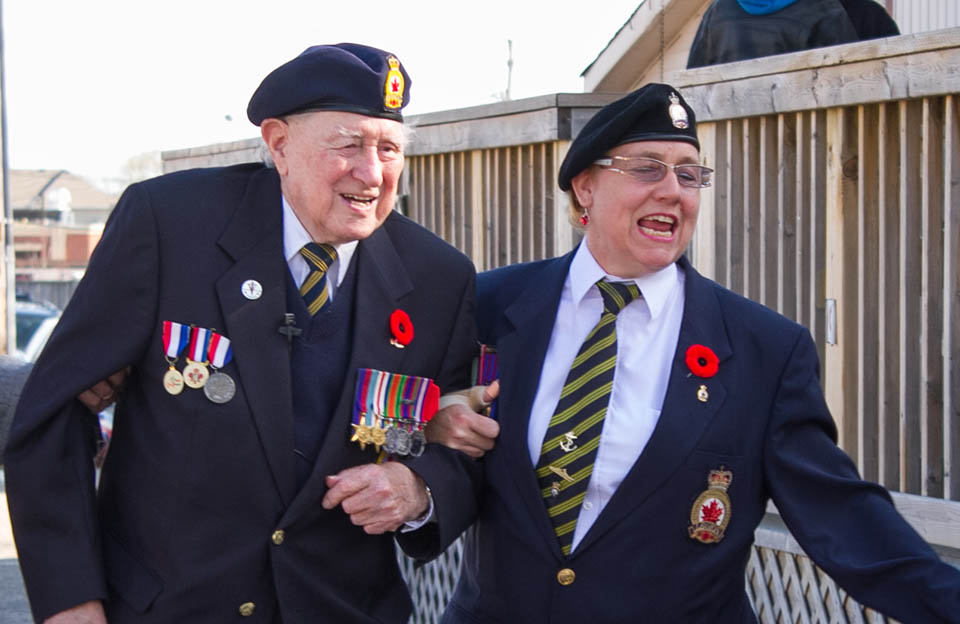 12th Field Regiment Gunner, Sir Fred Heber humbled by France saying he is a Knight, will celebrate his 95th at the Orangeville Legion, 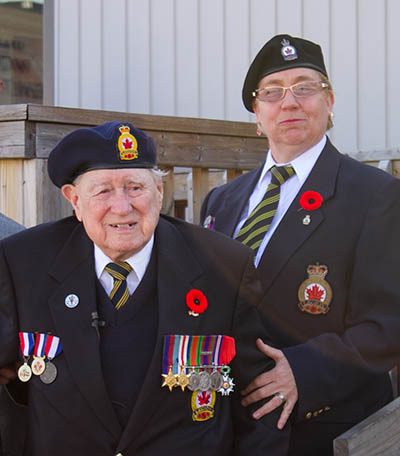 Veteran Gunner Frederick Heber, in 2014, earned the rank of Knight of the French National Order of the Legion of Honour for his extraordinary service >> Link for more info. 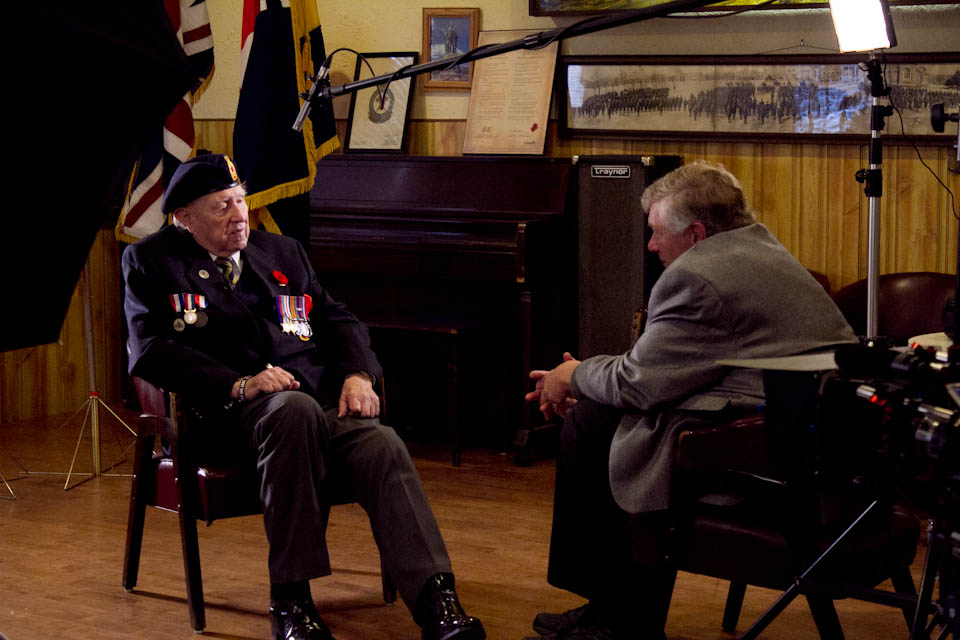 On November 15th, 2016, Fred Heber’s story was shared with the people of Normandy by 18 year-old Jared Wasson, student at Centre Dufferin DHS in Shelburne, Ontario

Using his interviews with Fred and his extensive research, Fred’s war service was retold on the beaches of Normandy and his Brick was unveiled. 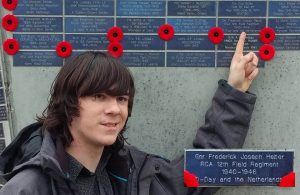 “For over a decade, students at Centre Dufferin DHS in Shelburn Ontario have been honouring our gallant Veterans as a part of our Battlefields & Digital Historian Project in Dufferin County. Working with the Dufferin County Museum, we have helped to locate, identify and commemorate the stories of our Veterans with Bricks at the Juno Beach Centre in Normandy, France. Additionally, the students have endeavoured to create digital biographies of these fine men & women, so that their stories and experiences can be stored in perpetuity at the Museum for future generations – Fred Heber’s story is one that deserves such recognition.

In November 2016, 37 students traveled to Normandy as part of our Battlefields Commemorations and participated in four Remembrance Ceremonies at the Canadian battlefields throughout Belgium and France. At sites with place names that reverberate through Canadian History like Vimy, Ypres, Dieppe and Juno Beach, our students told the stories of Dufferin County Veterans. On November 15th, Fred Heber’s story was shared with the people of Normandy by 18 year-old Jared Wasson. Using his interviews with Fred and his extensive research by Jared, Fred’s war service was retold on the beaches of Normandy and Gunner Fred Heber’s Brick was unveiled.

We in the Digital Historian Project are so proud to tell Fred’s story, and so honoured that he would let Jared share it with future generations of school children in Dufferin County. 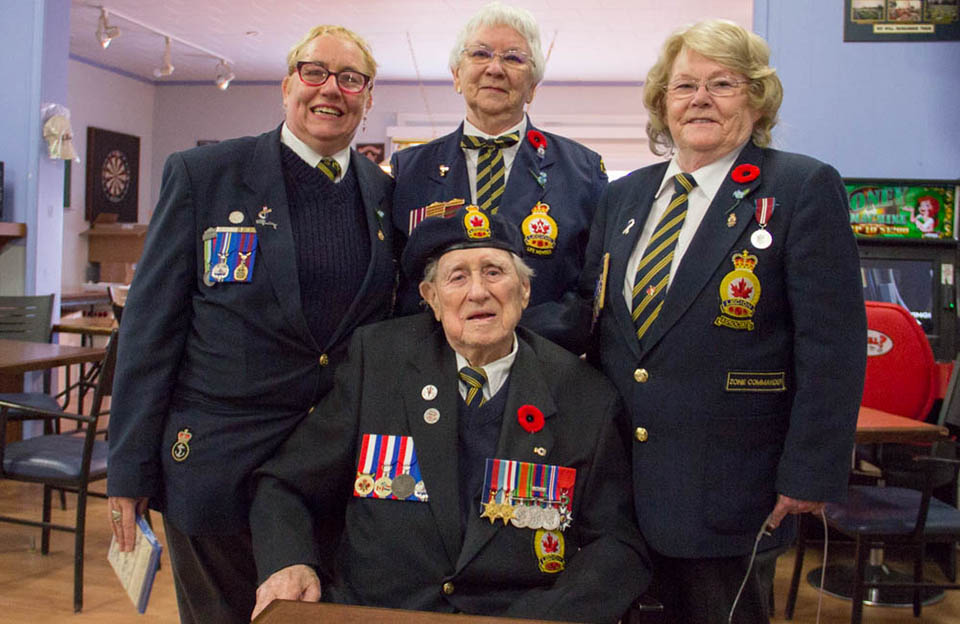 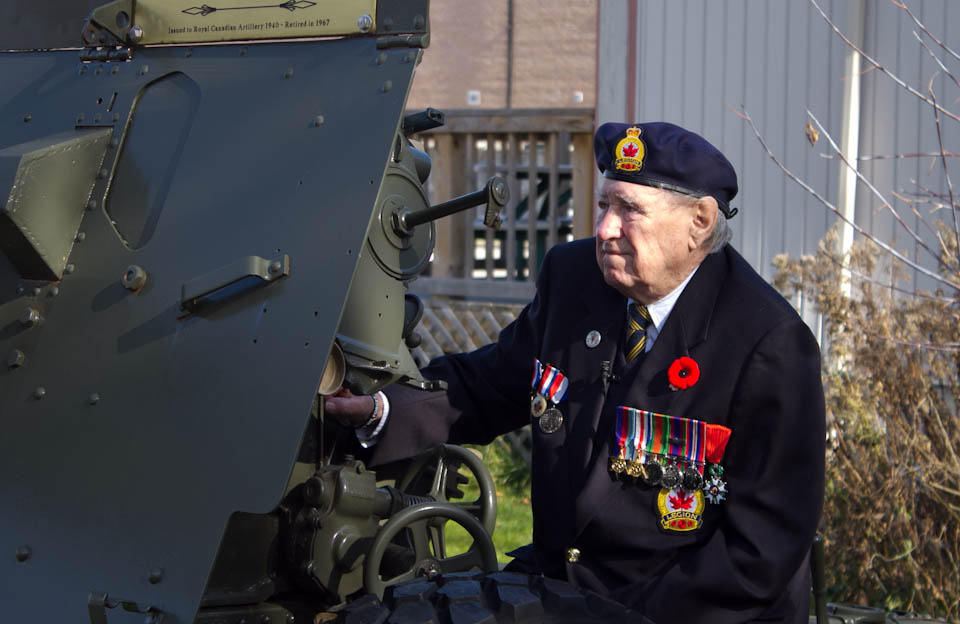 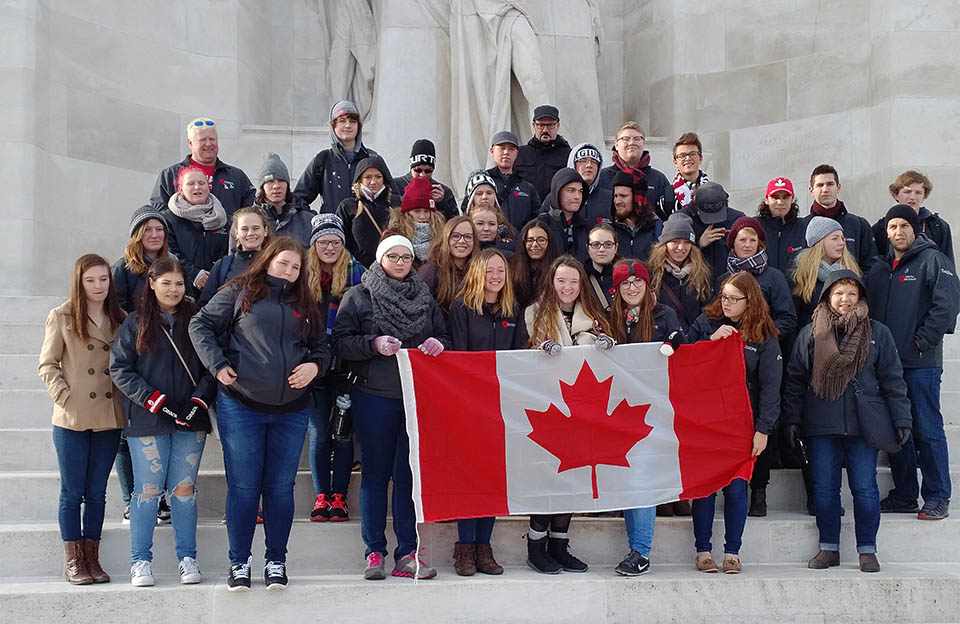 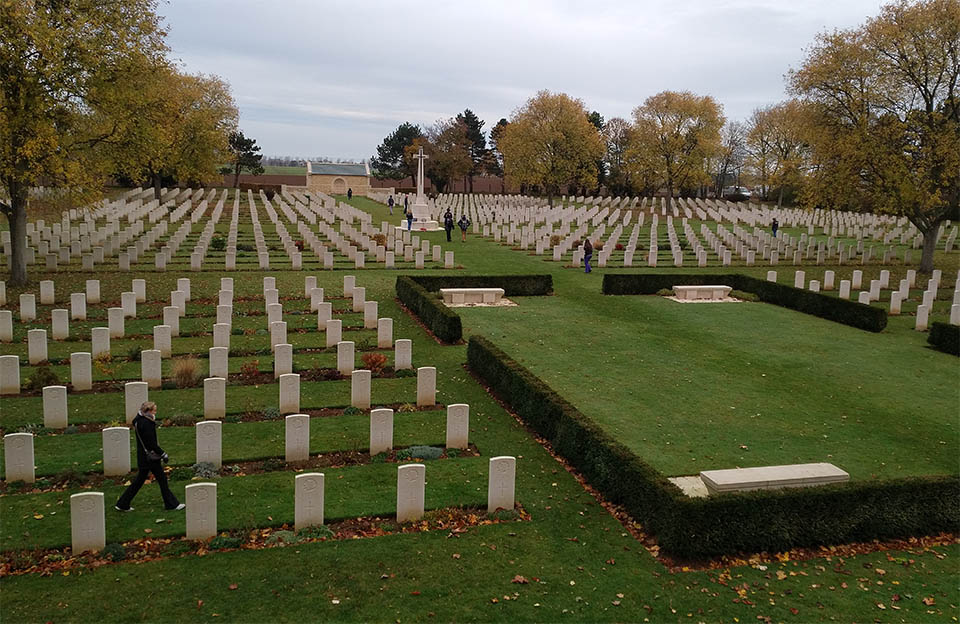 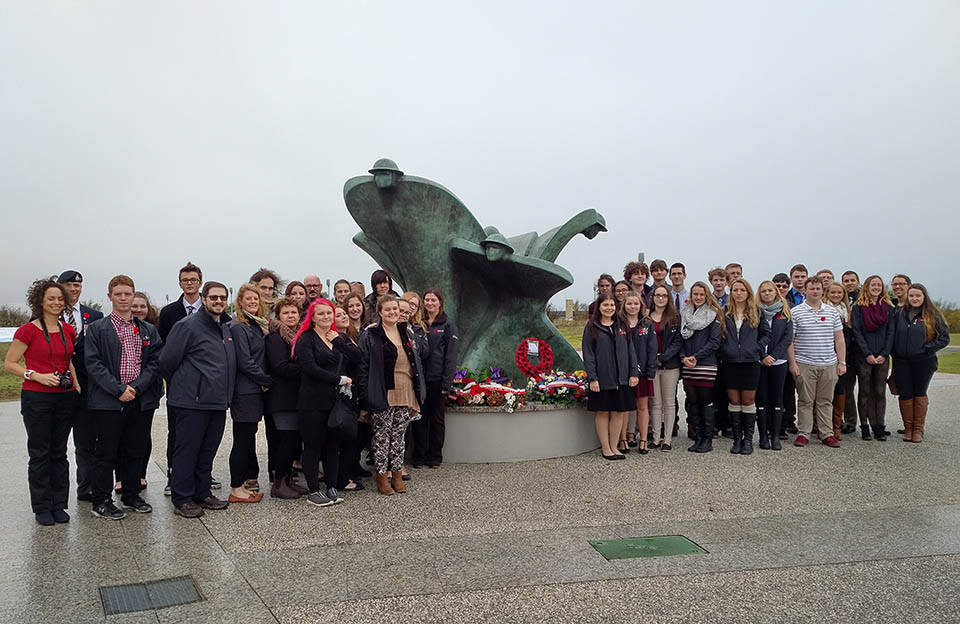 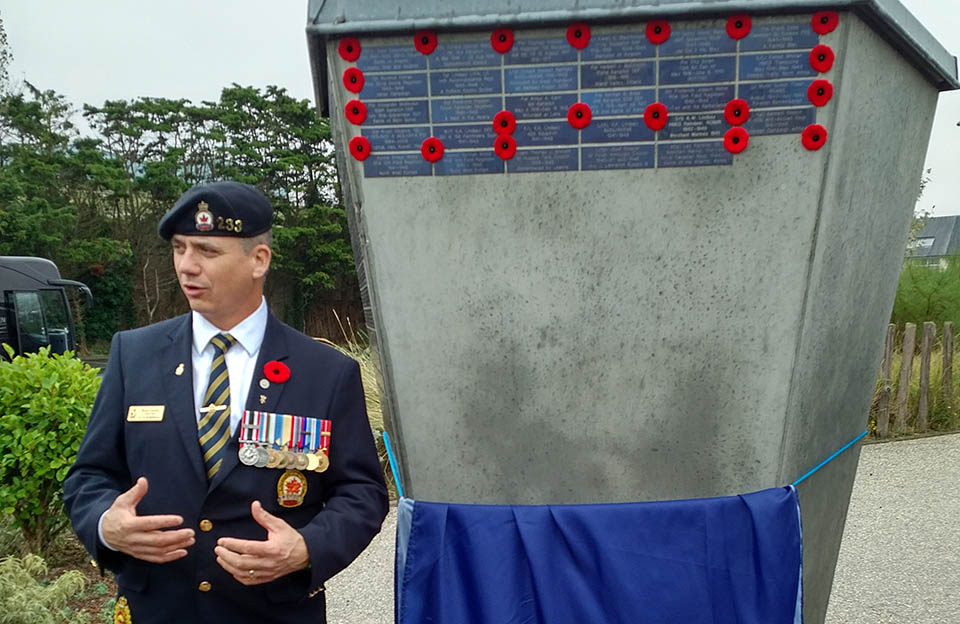 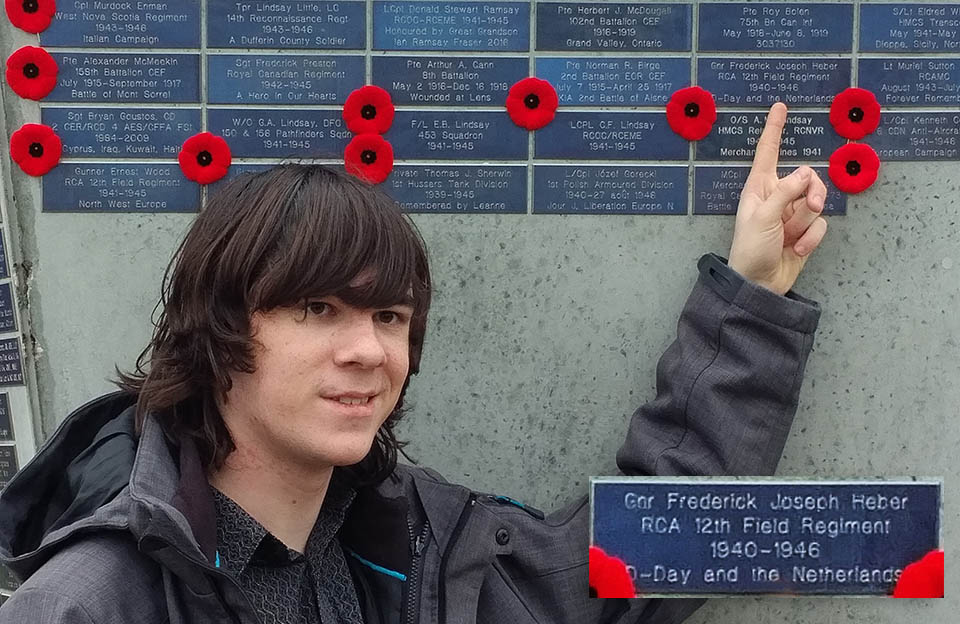