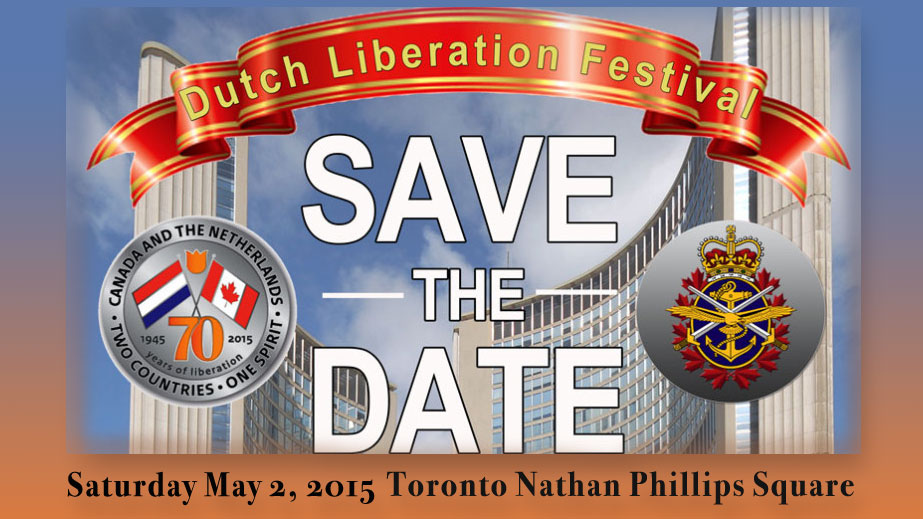 Join the 70th Anniversary of the Liberation of the Netherlands by the Canadian Armed Forces, May 2, 2015 at Nathan Phillips Square, Toronto.

In appreciation and honor to the veterans who served during the Second World War, the ‘Thank You Canada’ Dutch Liberation Festival will be organized on Saturday May 2nd in Toronto. Because of Canada’s role in the Netherlands during the Second World War and the tremendous sacrifice they made for peace and freedom, a close relationship and affinity between the two countries remains 70 years later.

A parade with veterans will march through downtown Toronto and endin g at City Hall. Authentic army jeeps or other military vehicles will also participate. Several marching bands will accompany the parade with music.

At Nathan Phillips Square, an opening ceremony will start at 2:00 pm on the main stage and includes the raising of the Dutch flag. Multiple bands will provide musical entertainment afterwards. Furthermore, Dutch festivities are being organized for everybody to enjoy. A photo exhibition and a Dutch market will also be present.

Veteran Gunners Fred Heber and Tom Morris at 93 years are hoping to be there to participate in the Parade. The 12th Field Regiment RCA was the first to cross the Rhine over the Waterloo Bridge and fire their guns (1)

The Liberation of the Netherlands VAC Link