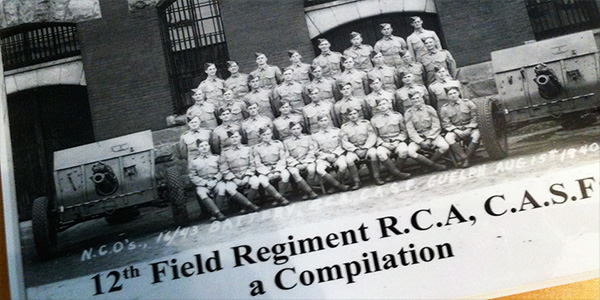 The Wellington County Branch of the Ontario Genealogical Society is recognizing The 12th Field Regiment R.C.A. (1940-1945) in a free programme to be held at the Arthur Legion Branch 226,  at 1.00 p.m. on Saturday June 7th, 2014.  The programme consists of two presentations:

A limited number of compilations of many names will be made available to those interested in both the military and family history of the 12th Field Regiment.   The organizing committee requests the assistance of the community in providing service numbers of some of the men listed.
In the family history segment, well-known speaker Glenn Wright, a family historian, former archivist at Library and Archives Canada, and a published author, will speak on locating the military records of veterans who returned to Canada and appear in researchers’ family trees. The military part of the session will be presented by Rob Stark, President of the 12th Field Regiment Association and a son of a late veteran of the Regiment.  Both Mr. Wright and Mr. Stark will use power point to enhance their presentations.

There will be a brief lunch break followed by the Remembrance service conducted by the Arthur Legion.

Link to: Perpetual Remembrance for the 12th Field Regiment >>