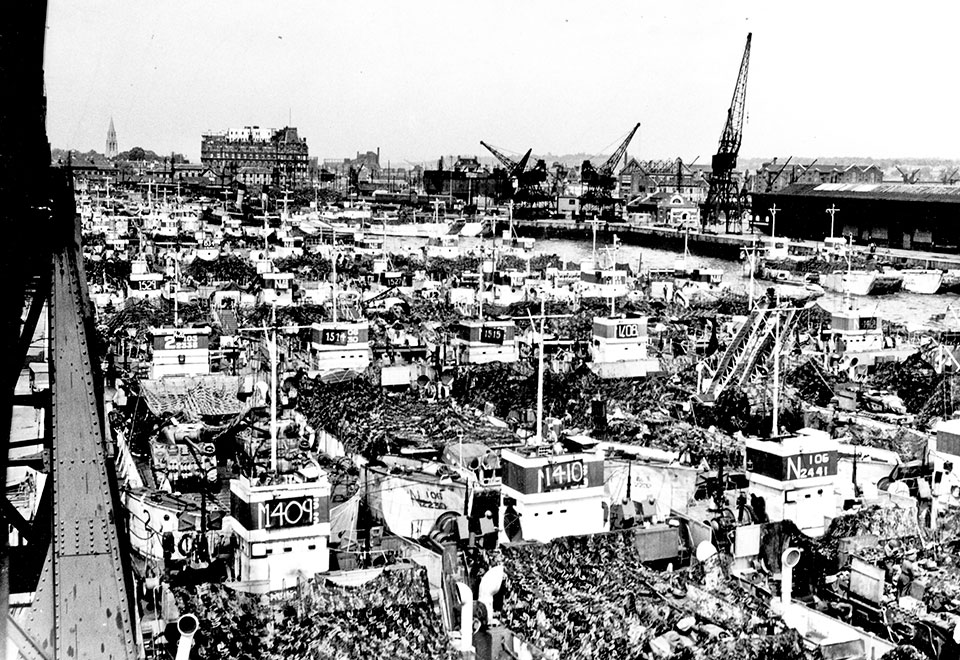 Operations Overlord was the code name for the Battle of Normandy, the operation that launched the invasion of German-occupied western Europe during World War II by Allied forces.

” The craft moved from Portsmouth to Southampton waters on the evening of June 4th. We had expected the area to be blanketed with a smoke screen to hide the preparations, but aside from the camouflaging of our guns with a huge net, which covered the whole gun space, no special precautions were taken. During the night we heard air raid alarms but no bombs were dropped near us. Our guess was enemy recce patrols. Saturday evening June 4th the wind came up, the glass dropped a bit, and the skippers got fidgety. On Sunday morning the familiar but hated signal came up. “ Postponed 24 hours”. The weather did not improve during the day and the wind was blowing just as strong Monday morning. However General Eisenhower had made his bold decision; in spite of the weather we were to push off. At 1100 hrs June 5th the first craft of “J” Force weighed anchor and headed for the RV. It was our unique experience to be first in many things later but everyone got a real “ kick “ from being first to leave our anchorage. We sailed past the whole invasion fleet of “J” Force in Southampton and Portsmouth harbours. The concentration of shipping in these waters had to be seen to be believed. It was a most impressive sight and we felt neither small nor insignificant when we saw was to follow in our wake.


When the craft passed through the Portsmouth “ boom “, the Craft Commanders were allowed to open their sealed orders and maps and to brief their men. The plan for the British 21st Army Group was to assault the coast of Normandy with three Divisions up. The 50th Division on the right. The 3rd Canadian Division in the centre. The 3rd British Division on the left. The 6th Airborne Division was also to be dropped in the hours of darkness preceding “H”-Hour to hold the left bank of the Orne Between Caen and the coast. The specific job of our Division called for two assaulting Brigades, the 7th and the 8th, each supported by an assault Artillery group consisting of two Regiments. The 7th Brigade was to assault the beach and establish a firm bridgehead based on the main highway and railway line running east-west from Caen to Cherbourg, about twelve miles inland. The 8th Brigade was to come up on the left, establishing a firm start line for the reserve Brigade to come through at last light and capture Carpiquet airdrome.
The 3rd British Division on our left were to take Caen. Optimistic objectives, events later proved, but everyone felt that nothing could stop us. Courselles-sur-Mer was our particular beach “Mike Green” we knew it as, and no one who saw it that fateful morning of June 6th, 1944 will ever forget it.

We sailed on that afternoon towards our destiny with the hopes of the free world to give us strength. No greater crusade had ever been mounted in the history of the world and every person who sailed that day realized what a great responsibility he carried with him.

It was smooth sailing until we got into the open Channel, then we hit a long heavy swell that wasn’t at all comfortable. The weather and the excitement combined with “ splicing the mainbrace ” to give us a very uneasy night. As the night progressed the craft tossed about more and more violently, with drenching spray flying continuously.

Until after dark the craft of the 12th Field Regiment in line ahead formation, with the 13th Field on their left still led the invasion. However, out of our sight ahead were the Mine sweepers who cleared and marked our channels. Far to the East and West could be seen the gathering craft of “S” and “K” Forces which were carrying our flanking Divisions.

At approximately three o’clock the air bombardment of the coast and targets inland began and was clearly visible from the sea. It was thrilling to have things begin and now all around us loomed the larger LSI’s carrying the assault craft to their RV’s. The next few hours were full of our preparations for firing and in the gathering light could be seen the immense converging of forces of the combined British and Canadian assaulting Divisions. At the RV’s everything seemed mixed up but out of the disorder came miraculously, an endless stream of LCA’s and LCT’s, all in perfect order. About 0630 hrs the LCT’s deployed for the firing run-in and at 0715 the blue flag broke out at the masthead of our ML. Everyone forgot his sea sickness for this was it! Our ranging rounds required only a small correction before our fire plan began. There were no “hitches “ and as we approached the shore we saw our rounds landing. The whole beach seemed a raging inferno; – fighters and fighter-bombers were strafing and bombing. Destroyers and cruisers were bombarding the beaches, four Regiments of Artillery were firing, plus the devastating closer support weapons, Landing Craft Rockets and Landing Craft Guns. Nothing had been left out and it was impossible to comprehend this vast picture. From the sea it looked as if the whole area would be completely pulverized and annihilated by the time we arrived. We earnestly hoped so!

Actually many of the defences escaped damage but it was our first taste of power and at the time the bombardment felt and looked very impressive. The Regiment fired approximately 150 rounds per gun and on our first run in closed to 3000 yards from the shore. We could see the LCA’s landing in spite of the high sea running. The Hun’s reply to our threat was not long delayed. Shells landed all around our craft and in front LCA’s were being blown up by mines. The Unit recce party, Major J.D. Ross, Lt’s Gothard, Harrison, Hair, Hooper, Ables and Signallers, was with the reserve assault Companies who actually landed with the assault Companies. They touched down at 0750 hours and were met on the beach by heavy machine gun and mortar fire. Our first casualties were Major Ross, Lt Gothard and Major Pickering, all within a few moments of landing. The landing of the Gun Group was to be controlled by the Unit Landing Officer, Major Goldie, but he was late landing and the LCT’s headed for our beach – “ Mike Green “ – as soon as it looked clear. Several hit mines on the final run in, D Troop LCT hitting six in the last thirty yards of the run in, and the craft floundered in four feet of water. All craft beached one way or another and the first vehicle of the Regiment to land was B Troop “ G” vehicle at approximately 0845 hrs – one hour after “H”-Hour. Fortunately, we hit a part of the beach which was not heavily mined and the Regiment deployed at the extreme left of “ Mike Green “ beach between the water and the sand dunes – a distance of not more than ten yards at high water. Immediately, we were called upon for supporting fire, which started at 1400 yards. We were the first Regiment to fire in France! Our beach, strewn with dead and wounded, rocked to the sound of our fire and the answering enemy guns. The two exits from the beach were blocked and to prevent over-crowding our guns were deployed side by side. With two of our Forward Observation Officers, Capt. Gillies and Capt Brown, by now well inland, the guns were busy giving support to the Infantry. The Medical Officer, Capt Finklestein, set up a RAP in a large bomb crater right under one of the Hun beach forts and within a short while was practically over-whelmed. It was a grim sight on “ Mike Green “ beach that day but after the Regiment was established there were few casualties. About 1530 hrs the main exit was cleared of mines and we moved to our first position inland, near Bannville. The 16th Battery lost two vehicles crossing a mine field but one tank was back in action in a few hours.

The Luftwaffe put in an appearance shortly after the Regiment cleared the beach but were quickly dealt with by our air force. We all began to breathe freely again and take stock. It was good! We had twenty four guns in action off the beach and our casualties hadn’t been too serious. The Infantry were still pushing steadily inland and our objective – the railway from Caen to Cherbourg was within sight. As darkness closed in, the Brigade was well past the intermediate objective meeting little opposition.

At 0600 hrs the Infantry started again and were very quickly on their objectives. The Royal Winnipeg Rifles at Putot-en-Bessin, the Regina Rifles at Bretteville-en-Bessin and the First Canadian Scottish Regiment at Secqueville-en-Bessin. ”

Ref: Into Action with The 12th Field – Toronto Public Library >>