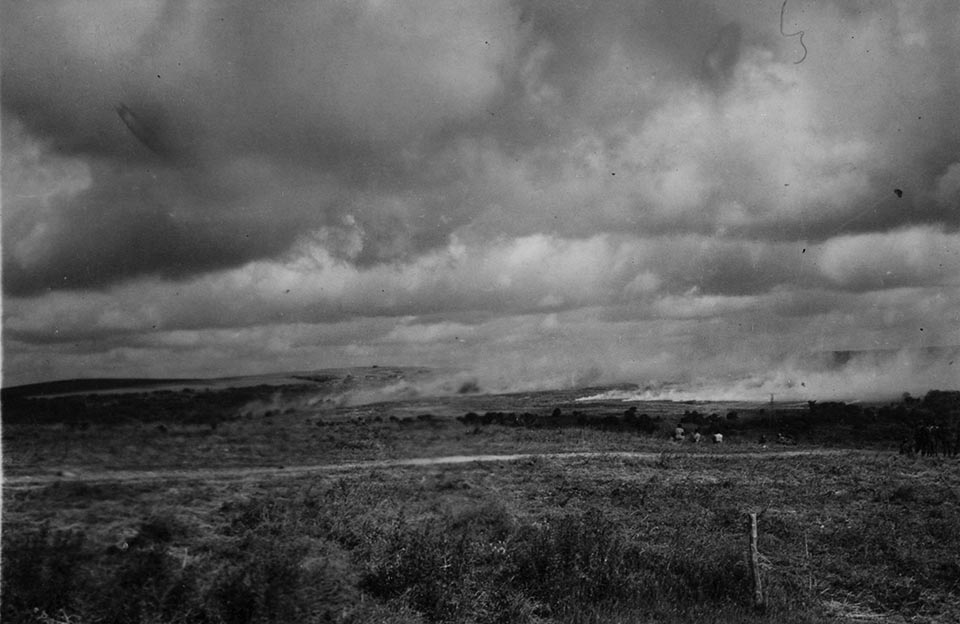 …..Shortly after midnight the night of March 10/11th the Regiment was en route to Cleve. We had just completed four weeks of very heavy fighting and certainly needed a breather. What was in store for us there, no one knew, but we expected that we would have a part in the assault over the Rhine. Actually we were going to Cleve both to rest and to get our equipment in shape. The Unit’s arrival in the new area unfortunately coincided with the arrival of a fairly heavy concentration from the far side of the Rhine — a decidedly unfriendly gesture. Happily however, there were no casualties, and although the general area was shelled every night we were there, all were near misses. There was a certain amount of sleep lost — no one ever gets entirely oblivious to the whistle of a shell — but we depended on them missing.
A nearby Mobile Bath did a roaring business and for recreation there were movies and liberty trucks to Nijmegen. A volley ball court was built and used enthusiastically every afternoon. The weather was excellent! The billets were not exactly sumptuous but at least they had roofs and that was a mark of distinction in Cleve, for most of the town was in absolute ruin.

We knew that the next offensive would be across the Rhine and from the build up of troops and supplies in our area it wasn’t hard to guess that it would take place on our front. What we didn’t know was the part our Division was to take. Speculation was rampant! We eventually received an assault scale so that we knew we would at least be crossing in the early stages. On March 17th a Recce party was sent to Wesel to recce a position practically on the west bank of the Rhine. A smoke screen from Nijmegen down the whole Rhine front hid our activities from the Germans, although it was lifted every other day just to assure the enemy that nothing of any particular interest was taking place. On the clear days nothing stirred on our side of the Rhine as it was imperative that our point of attack should be a complete surprise. Our proposed gun position was within small arms and mortar range of the enemy. The future did not look too promising! Though there was scarcely any cover, four hundred rounds per gun were dumped and camouflaged on the position in …..
p.125 ( Into Action with the 12th Field – 1945 Lt. T.J. Bell)

…..darkness. The ammunition included smoke and Peter fused HE. We were to be the first to fire this wonderful new proximity fuse which exploded the HE at tree top level and it was to be one of the many surprises in store for the Boche on Operation “Plunder”.
On March 20th the guns and Gunners moved to the new area but did not deploy. Everything was camouflaged and there was no movement of personnel during the daylight hours. The next day the Command Posts moved in and line was laid. The survey was to be done the next morning at first light and that evening the fire plan and traces, which showed that we were to support the 30th British Corps on the initial assault, came in to RHQ.
The weather was perfect, almost like summer, and on the 22nd the CO briefed the Officers on the forthcoming Operation. The 30th corps with the 51st (H) Division and 3rd British Division up were to assault across the Rhine at, and south of Rees. The 9th Brigade were to follow, enlarge the beach head area, and then the 7th Brigade was to break out and secure the south cast approaches to Emmerich. There was to be a “Pepper pot” consisting of machine guns, 3 and 4.2 inch mortars, 40 mm ack-ack guns and anti-tank guns and in addition a stupendous “Montgomery special” on all known German positions. The 12th Field Regiment were to be the only Canadian Regiment to cross the Rhine until Emmerich was taken and the CO expressly warned everyone that the Traffic Control people were to be complete masters and would feed the serials across the available bridges from the marshalling areas in much the same was as they did previous to ‘”D”-Day.
During the evening the wind changed and blew the smoke back on us but no secrets were divulged and the next morning the wind was right again. Upper register gun pits and Command Posts were dug and the guns put in action. The Germans became a bit. more active during the day and the 43rd lost a Quad and four hundred rounds of ammunition from shellfire but there were no casualties. One gun of the 11th Battery was used to record the target for the Peter fuse, otherwise the guns were silent until 1830 hours. Then the “Pepper pot” started and the din was really terrific! Aside from the hundreds ….
p.126 ( Into Action with the 12th Field – 1945 Lt. T.J. Bell)

March 17: across the RHINE, We dumped 400 mpg in new area after dark. Camouflage officer advised that the done by the 11 Bay was excellent. The CO returned from his 48 hr leave this evening bring Mr. ARMSTRONG with him from 2 CBRG and the new 16th Bty Comd Major COOPER.

March 18: Major A. G. GOLDIE, DSO recced a future area for A Ech this afternoon. This afternoon a band of the 4 CID entertained. the boys. We dumped some smoke and some PETER fused amo in the new position during the evening. The CO has postponed the move to the new area for 24 hours. Good weather again to-day with quite a bit of sunshine.

March 19: Major A. G. GOLDIE, DSO completed his recce of the new A Echelon position and a possible area for the residue parties. This area is near the village of HASSELT. There is very little accommodation here. The 16 and 43 Btys dumped 3100 rds their new position during the night. Weather continues fine and clear.

March 20: The regiment moved up to the new position during the day, starting with the 43rd Bty in the morning, the 16th Bty in the afternoon and the 11th Bty along with RHQ in the evening. The move was completed without incident and by 2200 hrs all were well settled. The weather is fine and visibility excellent.
March 21: The day was very quiet, in the evening the command post personnel prepared their command posts in the new area, lines were laid. The survey will be done at first light. The IO returned from Div with fire plans in support of 30 Corps 51 Div and 3 Div at 1500 hrs. Weather still good.

WAR DIARY OR INTELLIGENCE SUMMARY
March 22 – 24 1945
CALCAR
March 22: Commanding Officer held a conference of all officers in the morning in which he everyone in the picture. After the conference the officers mess entertained for a three fold purpose – 1 to welcome back Major FLEURY from CANADA. 2 To wish the the best to Major WILSON who left us to become the 2 i/c of the 4th Field Regiment. 3 To congratulate Major GOLDIE on his DSO. The Regiment moved up from the concentration area to the gun positions, starting at 1930 hours. All were complete in new area by 2000 hours. Move uneventful. The smoke screen back-fired on us this morning evening, made the visibility very bad and effected some peoples lungs.

March 23: The weather was excellent to-day, with a slight breeze in the right direction for the smoke screen. The morning was very quiet. The batteries were busy digging the gun pits and getting the guns in action. Jerry dropped a few shells in the 43rd battery a about 1230 hours. They lost a quad and 400 rounds of ammunition, but no casualties among personnel. Captain HAIR vent with 3 British Division as a SMK rep in case we had to use two batteries to lay a screen along the east bank of the river. Captain LESUEUR registered• one gun of the 11th battery on one of the Peter fuse targets. H – hour was confirmed as being 2100 hrs about 1530 and we opened up on the 30 Corps Counter Battery fire plan at 1700 hrs. The Peter fuze targets came off at 1830 in the midst of the PEPPERPT. Tracer seemed to be flying in all directions just Clearing the tops of the houses, and the noise vas terrific. The regiment started firing the fire plans in support of 51 Division at 2030 hours and continued at intervals during the night. Very few shells were thrown back, the 43rd losing an ammunition vehicle on the MOYLAND road. The attack by 2230 hours seemed to be going well and the bridgehead definitely established.


March 24: We continued support of 51 Div to-day. The attack is going fairly well. No sign of move for us just yet. The RAF was very active during the day and we heard the lanes going over for the paratroop landing. We need two more task tables from Div wring the afternoon. The Infantry were driven out of SPELDROP by enemy tanks but o attacking it again to-night. 9 Bdy is partially over the river, at least two battalions. A Class 9 ferry has been in operation since 1400 hours. A few Jerry hells near the 11th Battery. No damage done. A Typhoon crash landed a thousand yards away and burst into flames. Weather continues to be excellent, warm and sunny all day.