My father, our hero, Albert Falsetto was an amazing man! 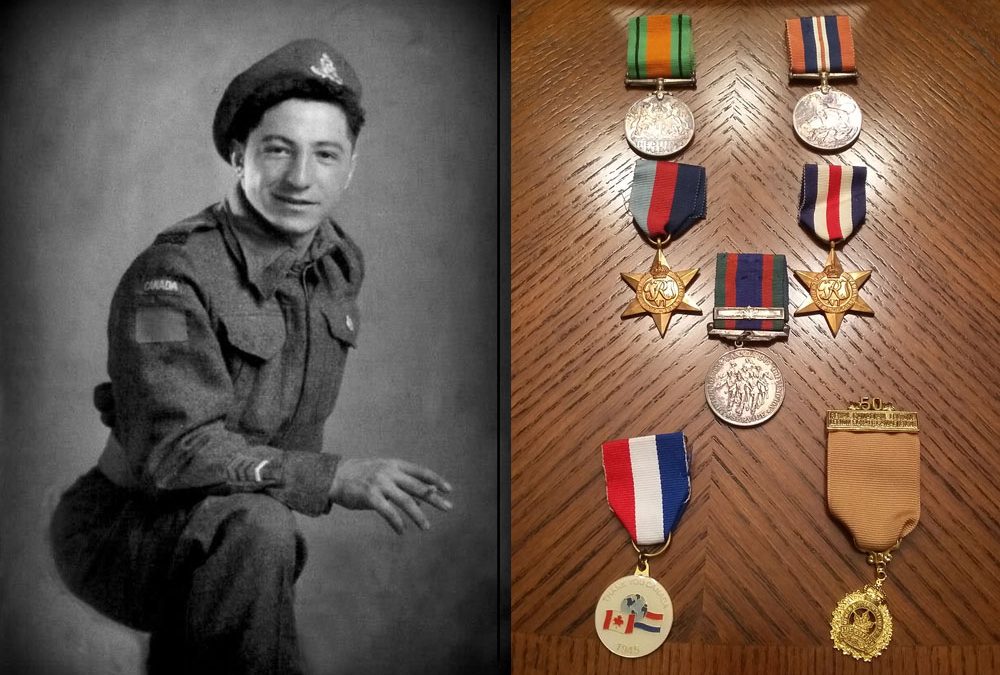 Our father, Albert Falsetto was an amazing man! 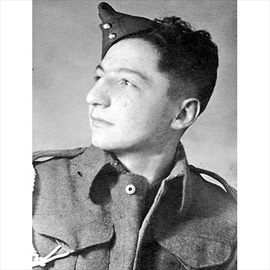 A courageous and dedicated officer as well as a patriotic Canadian in all aspects of life until the day he died. He served as a signalman and then a gunner in the Canadian Armed Forces during World War II.  Fighting for his Country on Juno Beach June 6, 1944, and only months later on Aug 14th, narrowly escaping a mistaken bombing by allies which killed over 150 soldiers  241 wounded.
Dad loved and was active in all kinds of sports, especially bowling and horseshoes. We have honoured our father with an annual charity horseshoe tournament in his name since the year he passed away. He would have loved it.
Dad was well-liked and active in the community.  He was an active member of Preston Legion Branch 126 and also the Knights of Columbus. He was a successful businessman. He and my mother owned and operated Al’s Fish and Chips in the Preston area of Cambridge for over 40 yrs.

Family meant the world to him. Raised with 11 siblings and raising 6 children with my mother, he organized family gatherings every chance he had.
My Dad didn’t talk about the war much. He didn’t dwell on the horrible things that he saw and experienced. He was a kind man with a big heart and he showed this through his caring ways to us as children and adults.  There wasn’t anything he wouldn’t do for us. He will always be our hero.
We would also like to mention our appreciation for the 12th Field Regiment website, honouring the men that served for this country and telling their individual stories.

Thank you,  The Falsetto family 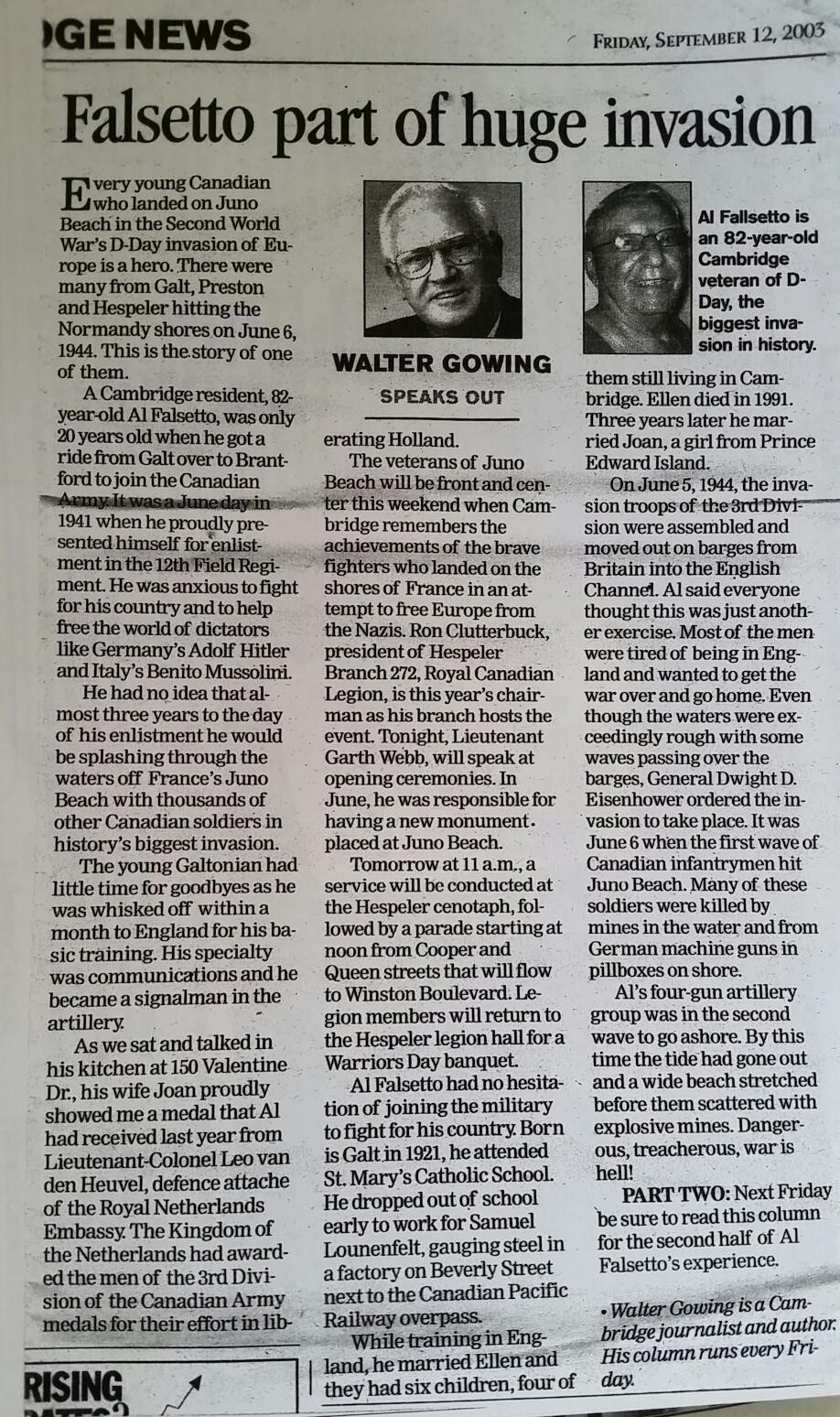 A 20-year-old Galt boy, AL Falsetto, landed on Juno Beach during the D-Day invasion of France on June 6, 1944. Now living in Preston with his wife Joan, the 82-year-old veteran of the Second World War participated in last weekend’s Warriors Day celebrations.
It was a time for Canadians who were involved in that historic invasion to free the peoples of Europe. The invasion included many young men from Cambridge.
If it’s action that you want, then you should have been with Al Falsetto on that June 6 day when he, along with thousands of Canadian troops, stormed Juno Beach.
There were five beaches, stretching about 100 kilometres along the French coast: Utah and Omaha to the west, both invaded by the Americans. To the east of these were targets named Gold Beach invaded by the British, Juno Beach taken by the Canadians, and Sword Beach captured by the British.
As the barge carrying Al and his artillery unit of four big guns, part of the 12th Field Regiment, approached the beach, they were ordered to shell the German pillboxes on shore. The water was so rough that the barge was bobbing up and down and the shells were shooting off in every direction, none making it to shore.Thanks to a receding tide when they left the barge, the dangerous mines that were left behind by the German military were exposed on the beach and Al and his comrades manoeuvered around them. The unit was pinned down on the beach for several hours. After one direct hit on a German pillbox, Al recalls seeing the late George Johman, another Galt boy that had landed in the first wave of infantrymen, climb on top of the pillbox and “wave us on up the beach.” Al and George, after the war, met back in Galt.
Entering the city of Caen, Al’s unit was directed to a church with a high steeple. He said it reminded him of Knox Presbyterian Church in Galt. However, a German sniper was located in the steeple and had killed a number of Canadian infantrymen.
“The German army didn’t think that we would hit a church, but boy were they wrong,” said Al. He said, “We blew the steeple right off the building and that ended the sniper’s killing.”
On August, 14, 1944, Al was with the 16th Battalion in the Hotsvaniel Quarry in Holland. The German army was entrenched in a second quarry nearby. A call for Allied aircraft to bomb the enemy misfired. The Allied planes bombed the Canadian troops by mistake. Al termed the experience “horrible”, as many soldiers were killed or injured by the so-called friendly fire. Al has an aerial photo taken by one of the aircraft to prove the unfortunate incident.
Following D-Day, Al served in France, Belgium, Holland and Germany. He had been hospitalized in Brussels, Belgium at the end of the war and his unit returned home without him. After a short stay in a British hospital, he returned home aboard the Queen Mary.
After the war, Al operated a one-car taxi business in Galt known as Al’s Taxi. He then worked at Eastern Steel Products for eight years before opening Al’s Fish and Chips in Preston. I was a regular customer and Al made great fish and chips.
Al Falsetto and all his buddies who landed on Juno Beach deserve our respect and our thanks. War is hell!
*Walter Gowing is a Cambridge journalist and author. 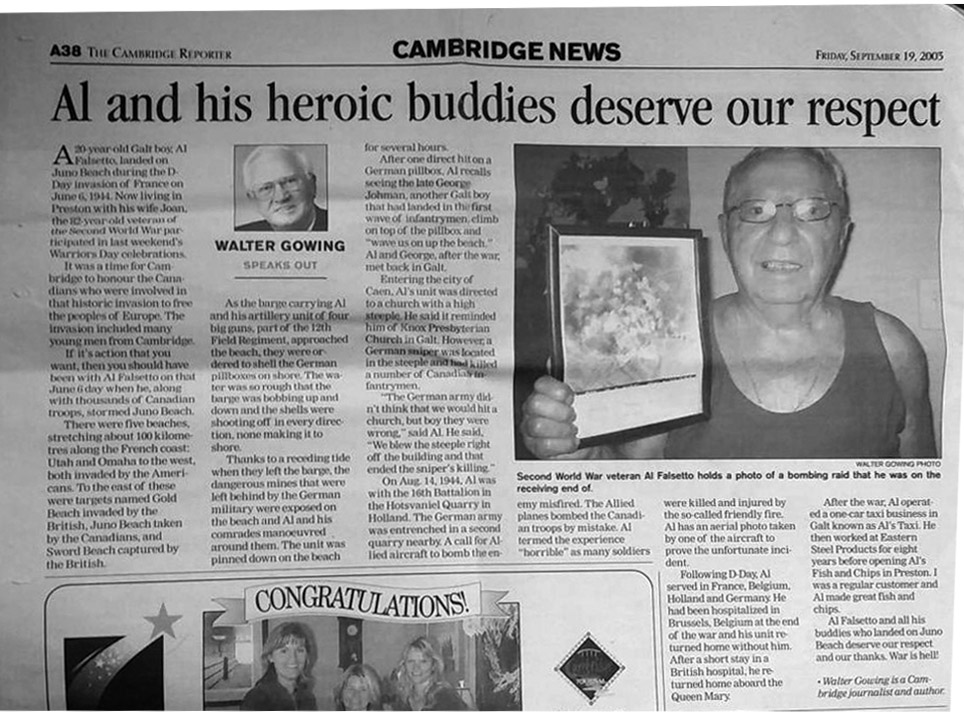 Medal of Remembrance in relation to the Liberation of Holland : 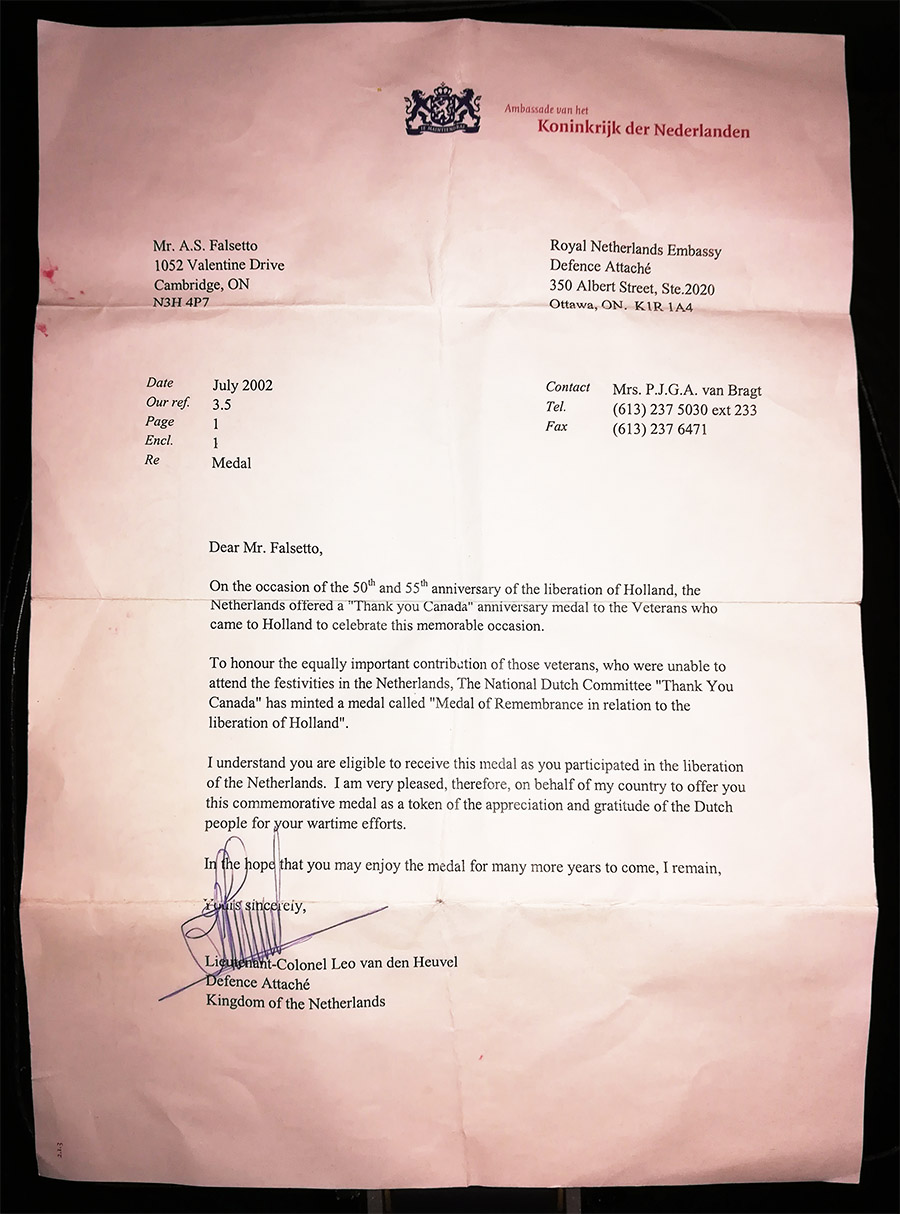