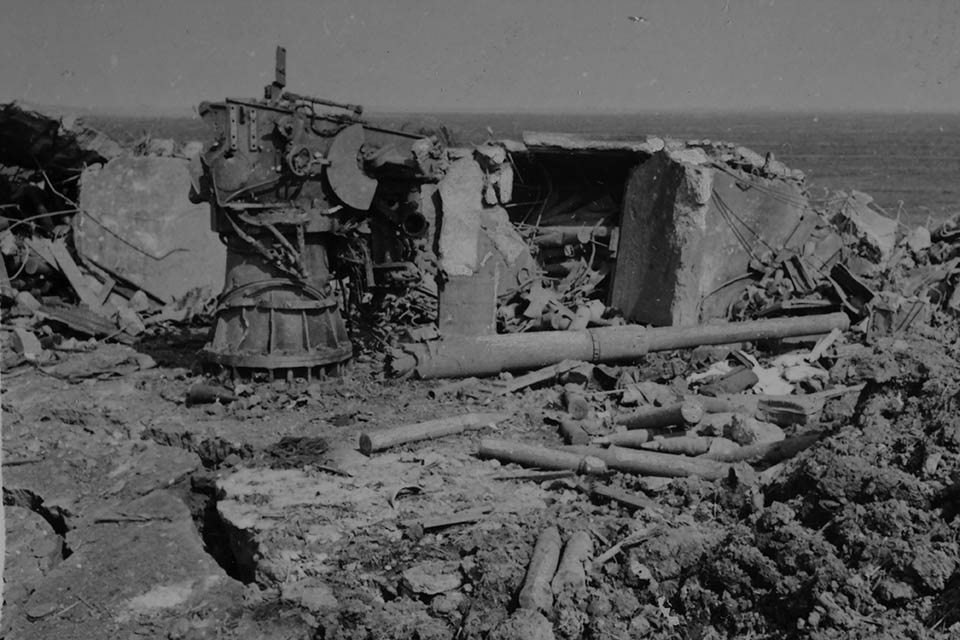 …. we had again hit the Jerry who showed every evidence of firming up and fighting for Deventer. The Winnipeg Rifles had great difficulty holding a bridgehead across the Schip Beebe Canal and the Canadian Scottish were also meeting stiff opposition due south of Deventer. From the OP, which was situated in a house formerly occupied by the SS and used as an internment camp, came the story that ten bodies of Dutchmen had been uncovered. They were buried, some while still alive and all had their hands tied behind their backs and their bodies were bruised from head to foot. A scene of indescribable torture which had to be seen to be believed. This gave credence to the stories so often read in the papers.

Numerous “Mike” targets were fired in support of the Winnipeg Rifles who were still holding a small bridgehead, The Engineers were still unable to build a bridge as the area was under small arms fire, but we fired red smoke for the Typhoons and heard enthusiastic reports from the OP’s regarding the success of their attack. One report was not quite so enthusiastic however, as while Major Hoary and Lt-Col Fulton were visiting B Company position of the Winnipeg Rifles around noon, three misguided Typhoons bombed and straffed the Company area. Their remarks are unprintable but very fortunately there were no casualties, and the Major and the Colonel were eventually coaxed out of a slit trench. 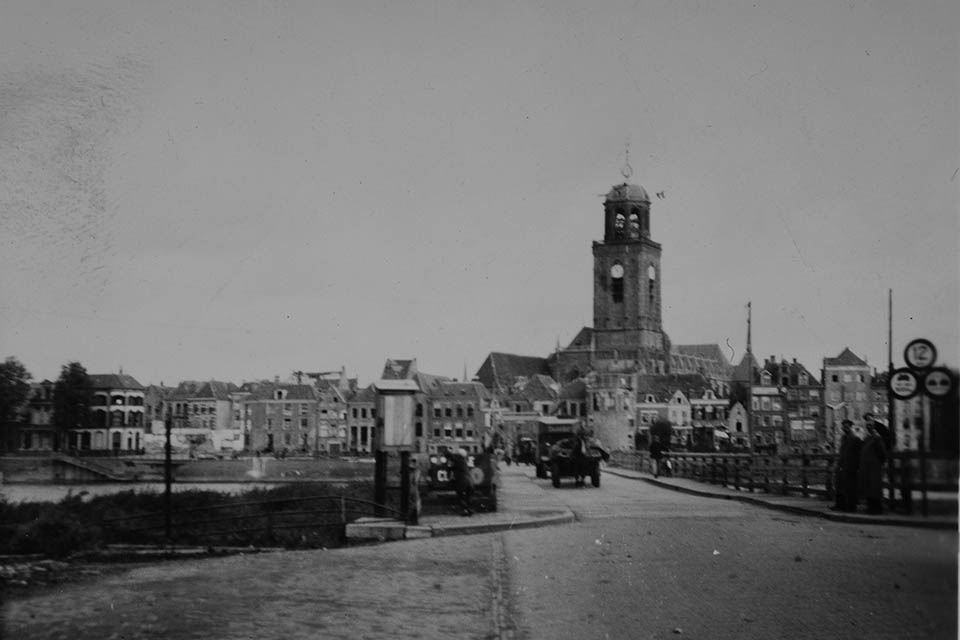 Deventer. Lt T. E. Peach was wounded while FOO’ing with the Regina’s. A Company of the Regina’s had attacked during the night and while Lt Peach and the Company Sjt Major were en route to join them at first light they were ambushed.

Deventer was attacked by the 7th Brigade on the 10th and taken without a great deal of trouble although the enemy DF fire was very heavy and caused many casualties to the Infantry while they were forming up. The attack went in from the north east and one OP after establishing itself in Deventer found itself looking back towards the Regiment and ending a beautiful target of 88 guns. Whoever invented the OT-BT factor hadn’t visualized this, but the target was engaged and …..
(p 131. Into Action with the 12th Field – Lt. T.J. Bell – 1945 ) 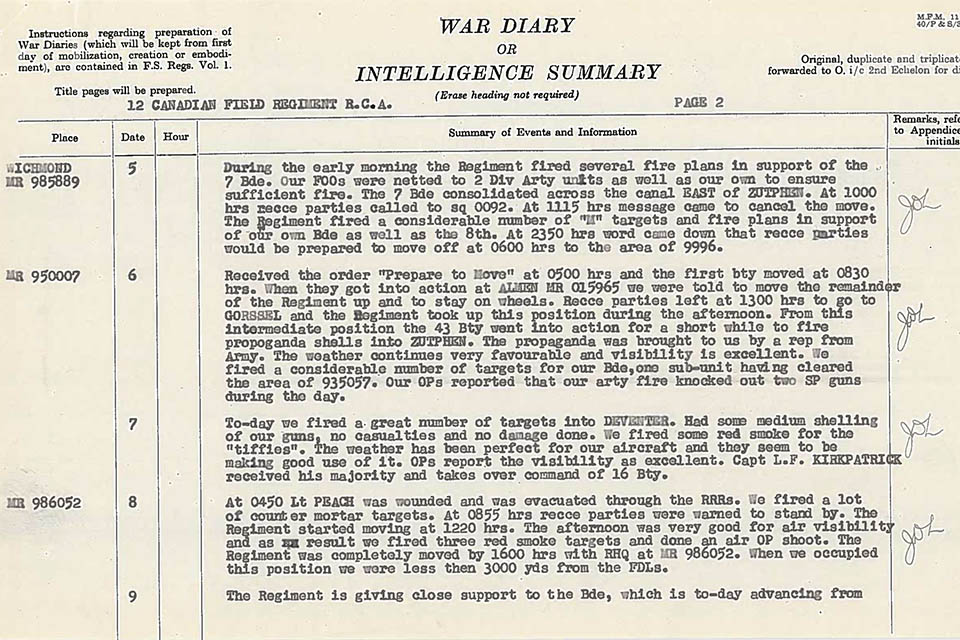 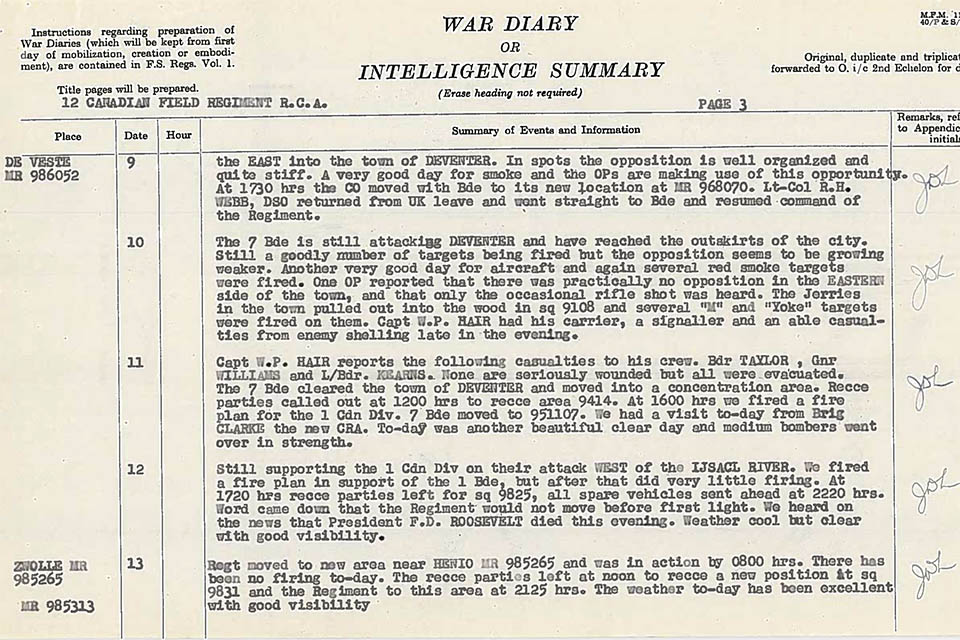 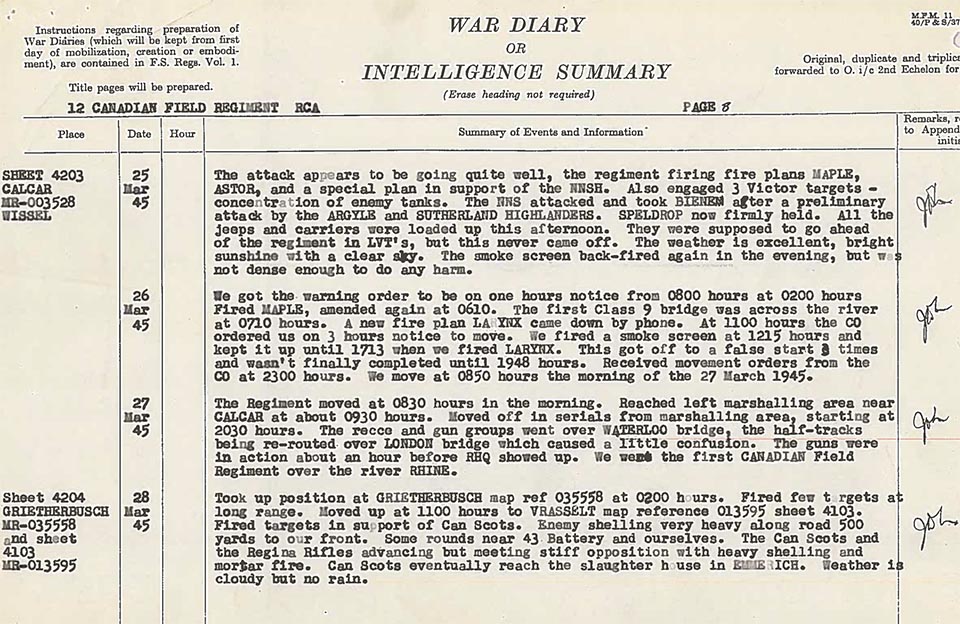 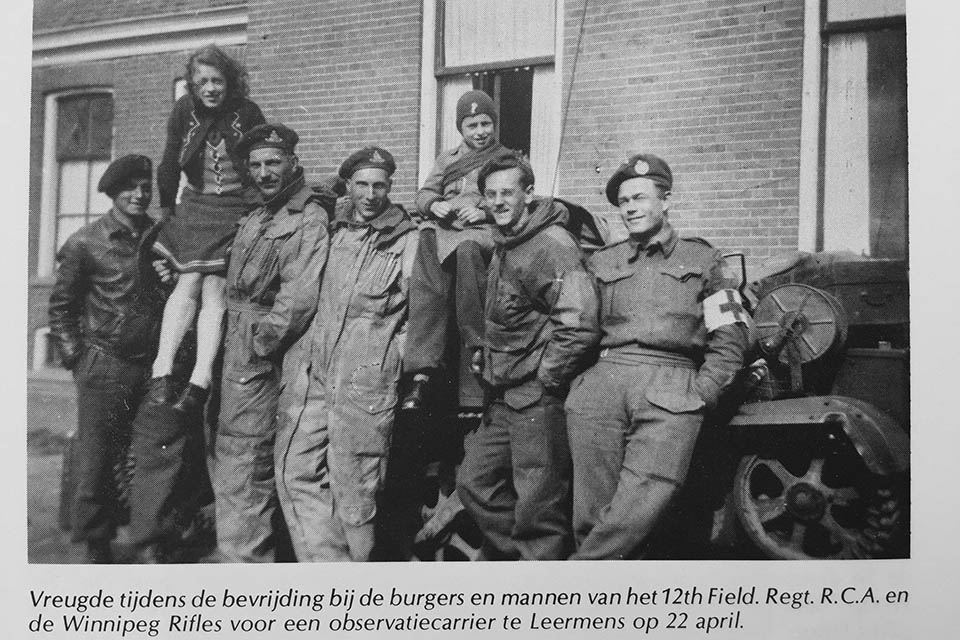 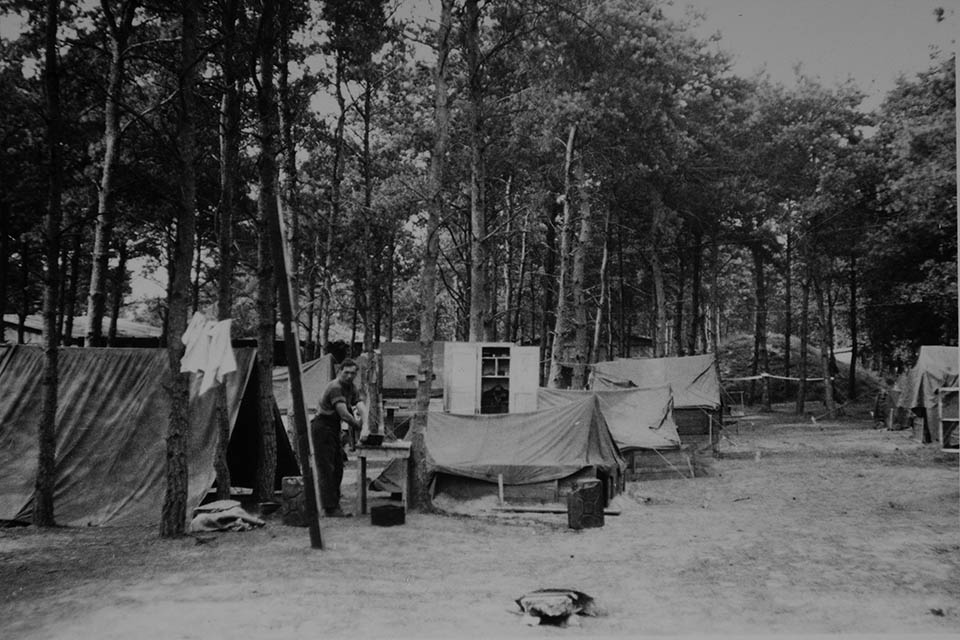 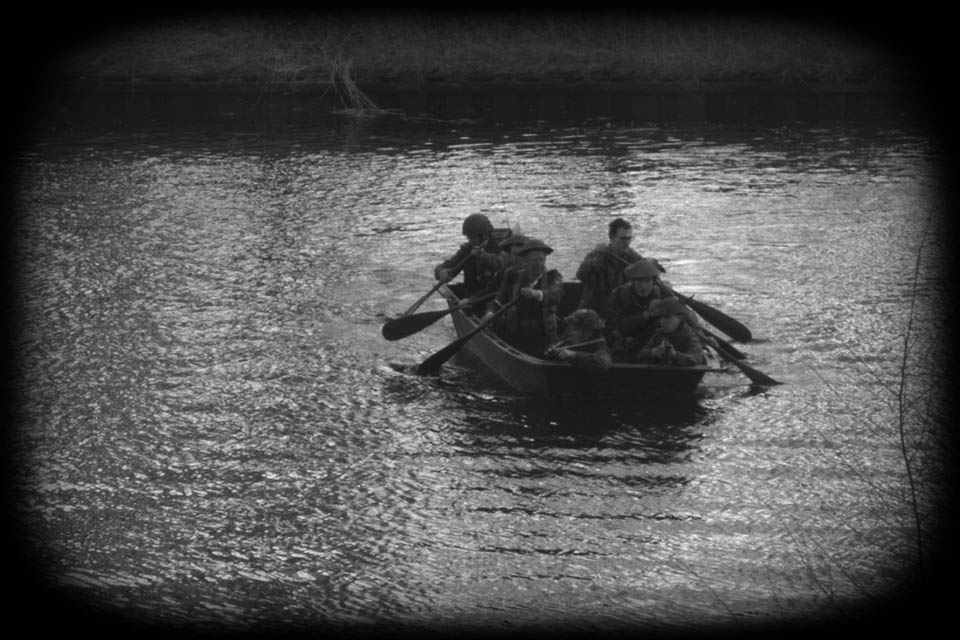 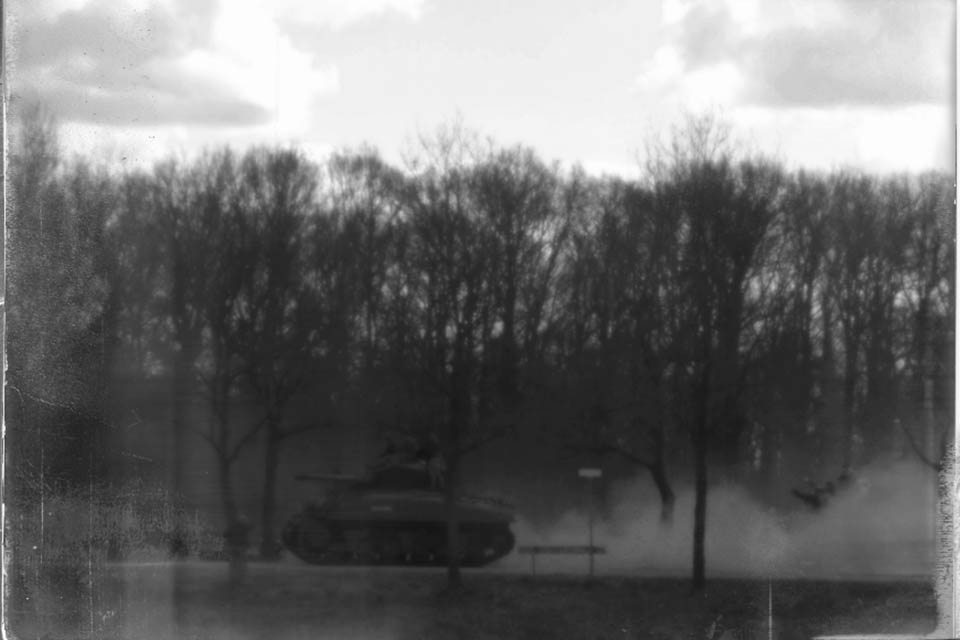 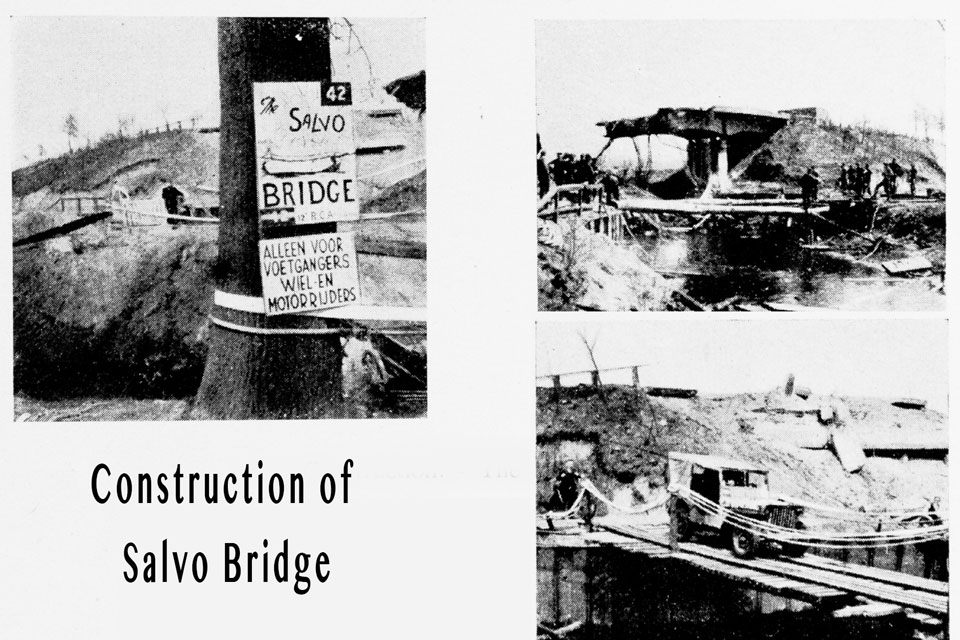 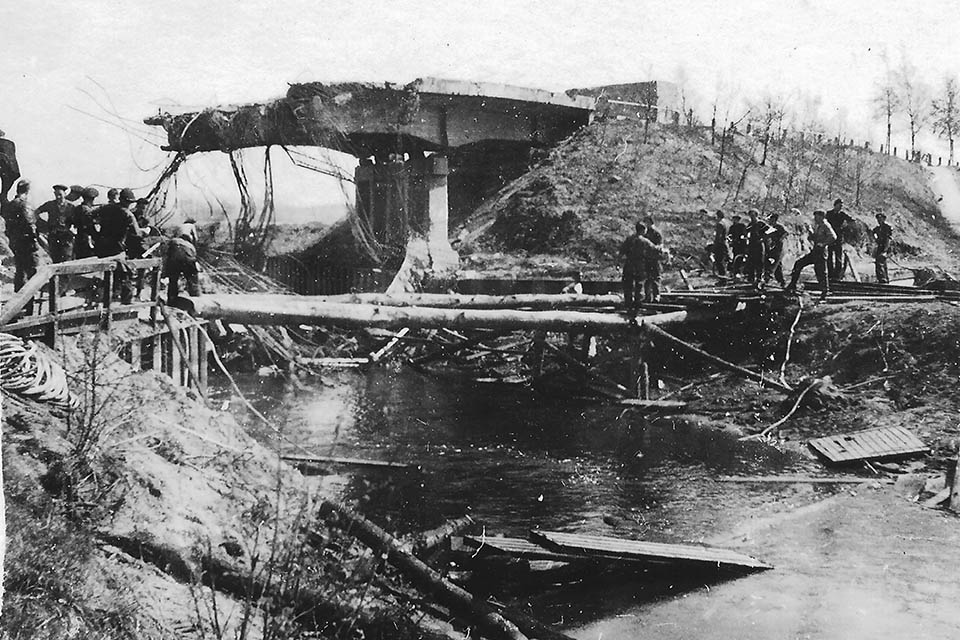 ….. later reports when the Regina’s took the area that night showed two of the six were knocked out. Several “Yoke” targets were fired at the woods into which the Germans had withdrawn but a good many of them must have escaped across the Ijssel the night before. Harassing fire knocked out a 43rd OP carrier that evening and there were three not too serious casualties.
The 7th Brigade after clearing Deventer moved out to a concentration area and we prepared to fire a fire plan to support the 1st Division’s attack across the Ijssel 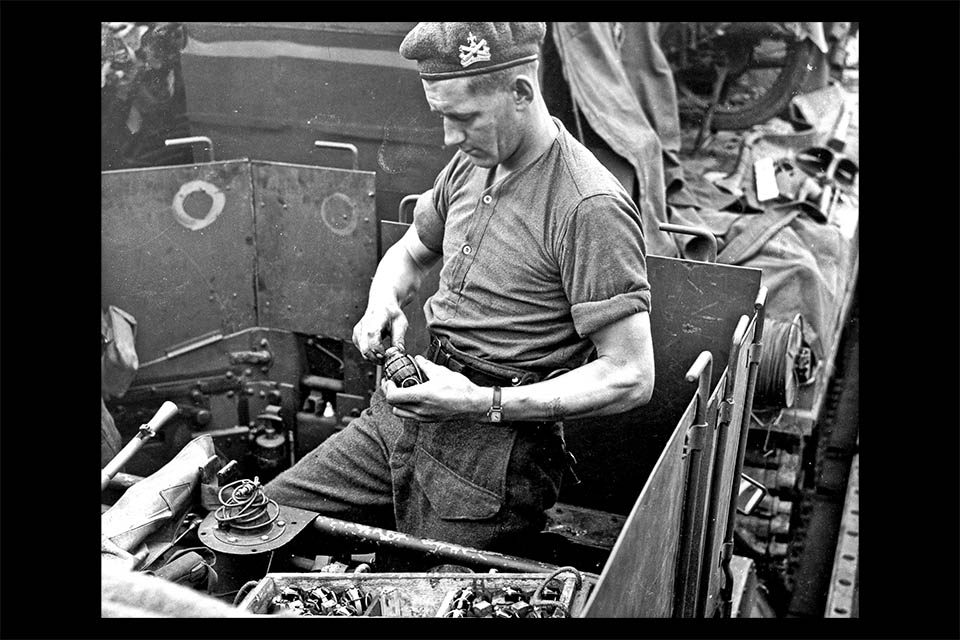 towards Appeldorn. This attack started on the 11th and we supported them until the 13th when the Regiment moved north to Heino. The Brigade in the meantime had been busy mopping up west from Raalte to the Ijssel and was now moving north towards Zwolle.
Their work was mostly of a patrol nature and since they only contacted the enemy here and there it was difficult to stay even in wireless communication with the FOO’s. Our support was impossible. The Divisional plan, as there were reports of a strong force in Zwolle, was for the 7th Brigade to contain the town while the 8th and 9th bypassed it and headed north. The Regiment moved from Heino to an area just south of Zwolle and almost before the Divisional plan could take form a Company of the Regina’s and one of the Regiment-de-la-Chaudiere’s of the 8th Brigade had taken Zwolle and almost without a struggle. The gun position was a fairly good one as farms were abundant and everyone had a chance to get under cover and more or less relax for a few days. On the main Zwolle—Deventer highway just south of RHQ the Jerries had blown a large bridge which necessitated a very long detour. Lt Col Webb made a recce and decided we should build a bridge to take jeeps and motor cycles. The LAD took charge of the project and started work with a few strong arms from each Battery. The bridge was eventually completed after several days and while not exactly a work of art it served its purpose very well. It was opened with a great flourish and christened the “Salvo Bridge” after our weekly newspaper.
There was a large gap between Deventer and Zwolle so the Ross Force was formed to plug it and the 16th Battery moved back to Raalte to support this force. The Infantry Battalions …. 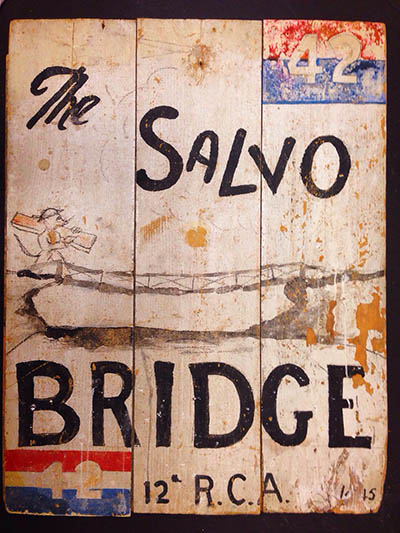 ZUTPHEN – DEVENTER
April 5th During the early morning the Regiment fired several fire plans in support of the 7 Bde. Our FOOs were netted to 2 Div Arty units as well as our own to ensure sufficient fire. The 7 Bde consolidated across the canal EAST of ZUTPHEN. At 1000 hrs recce parties called to sq 0092. At 1115 hrs message came to cancel the move. The Regiment fired a considerable number of “M” targets and fire plans in support of our own Bde as well as the 8th. At 2350 hrs word came down that recce parties would be prepared to move off at 0600 hrs to tho area of 9996.

April 6th Received the order “Prepare to Move” at 0500 hrs and the first bty moved at 0830 hrs. When they got into action at ALMEN MR 015965 we were told to move the reminder, of the Regiment up and to stay on wheels. Recce parties left at 1300 hrs too to GORSSEL and the Regiment took up this position during the afternoon. From this intermediate position the 43 Bty went into action for a short while to fire propaganda shells into ZUTPHEN. The propaganda was brought to us by a rep from Army. The weather continues very favourable and visibility is excellent. We fired a considerable number of targets for our Bde, one sub-unit having cleared the area of 935057. Our OPs reported that our arty fire knocked out two SP guns during the day.

April 7th To-day we fired a great number of targets into DEVENTER. Had some medium shelling of our guns, no casualties and no damage done. We fired some red smoke for the “tiffies”. The weather has been perfect for our aircraft and they seem to be making good use of it. OPs report the visibility as excellent. Capt L.F. KIRKPATRICK received his majority and takes over command of 16 Bty.

April 8th At 0450 Lt PEACH was wounded and was evacuated through the RRRs. We fired a lot of counter mortar targets. At 0855 hrs recce parties were warned to stand by. The Regiment started moving at 1220 hrs. The afternoon was very good for air visibility and as a result we fired three red smoke targets and done an air OP shoot. The Regiment was completely moved by 1600 hrs with RHQ at MR 986052. When we occupied this position we were less then 3000 yds from the FDLs.
April 9th The Regiment is giving close support to the Bde, which is to-day advancing from ….

April 9th: the EAST into the town of DEVENTER. In spots the opposition is well organized and quite stiff. A very good day for smoke and the OPs are making use of this opportunity. At 1730 hrs the CO moved with Bde to its new location at MR 968070. Lt-Col R.H.WEBB, DSO returned from UK leave and went straight to Bde and resumed command of the Regiment.

April 10th: The 7 Bde is still attacking DEVENTER and have reached the outskirts of the city. Still a goodly number of targets being fired but the opposition seems to be growing weaker. Another very good day for aircraft and again several red smoke targets were fired. One OP reported that there was practically no opposition in the EASTERN side of the town, and that only the occasional rifle shot was heard. The Jerries in the town pulled out into the wood in sq 9108 and several “M” and “Yoke” targets were fired on them. Capt W.P. HAIR had his carrier, a signaller and an able casualties from enemy shelling late in the evening.

April 11th: Capt W.P. HAIR reports the following casualties to his crew. Bdr TAILOR , Gnr WILLIAM, and L/Bdr. KEARNS. None are seriously wounded but all were evacuated. The 7 Bde cleared the town of DEVENTER and moved into a concentration area. Recce parties called out at 1200 hrs to recce area 9414. At 1600 hrs we fired a fire plan for the 1 Cdn Div. 7 Bde moved to 951107. We had a visit to-day from Brig CLARKE the new GRA. To-day was another beautiful clear day and medium bombers went over in strength.

April 12th: Still supporting the 1 Cdn Div on their attack WEST of tho IJSSEL RIVER. We fired a fire plan in support of the 1 Bde, but after that did very little firing. At 1720 hrs recce parties left for sq 9825, all spare vehicles sent ahead at 2220 hrs. Word came down that the Regiment would not move before first light. We heard on 1 the news that President F.D. ROOSEVELT died this evening. Weather cool but clear with good visibility.

April 13th: Regt moved to new area near HENIO MR 985265 and was in action by 0800 hrs. There has been no firing to-day. The recce parti s loft at noon to recce a new position it sq 9831 and the Regiment to this area at 2125 hrs. The weather to-day has been excellent with good visibility.