His fear but also his hope for the future 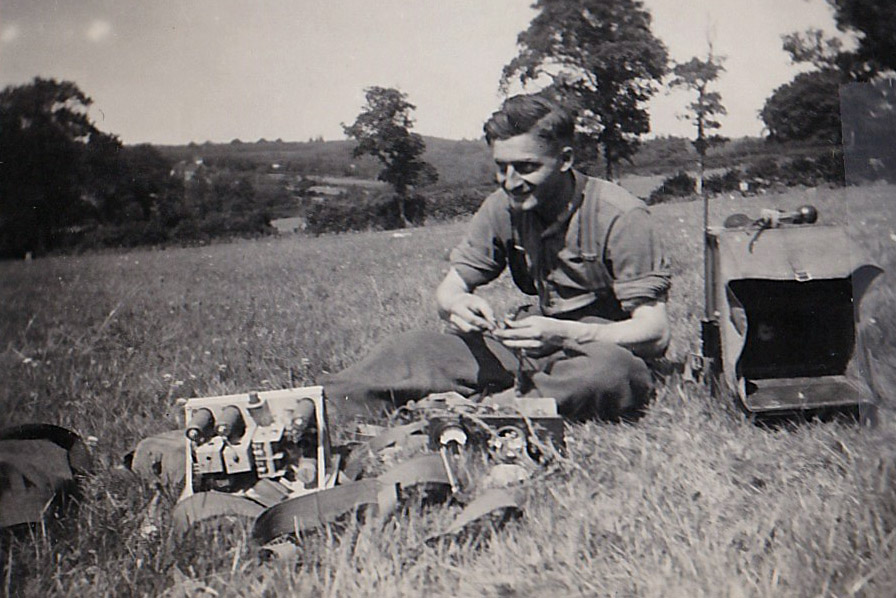 Where does one begin to describe the life of a person who lived less than twenty-five years? A person who was respected and loved by all who knew him; a person who left a legacy of words through which future generations can know him? 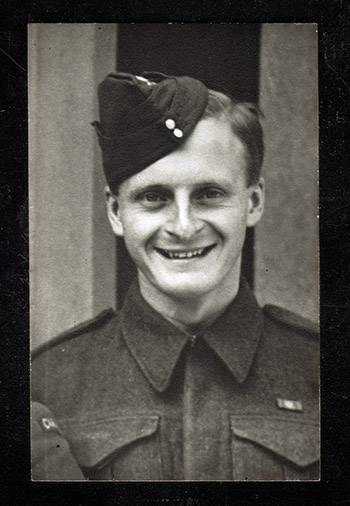 Walter Roy Dowden was born in Plymouth, Devon, England on July 17, 1919, and came to live in Brantford, Ontario, Canada in the following year.

By the time he was a teenager, he had nine siblings ( three sisters and six brothers). He was active in Scouting and cadets and the militia in Brantford and spent time at ‘army camp’. Walt officially “joined-up” on June 12, 1940, and became a member of the 11-69th Field Battery, Third Division, Royal Canadian Army, Number B-11194. Soon after Walt left for Petawawa, the 11-69th Battery and the 16-43rd Battery joined forces to form the 12th Canadian Field Regiment.
After training at Petawawa and Sussex, New Brunswick, Walt’s regiment sailed to England, arriving in Liverpool, England on July 30, 1941. During almost three years of training in England, Walt wrote copious letters and postcards to his family at home; many of these were saved by a sister and are treasured by his family. He detailed his experiences (unless censored), his feelings, and told of a young woman, Rae, who had become important in his life. He also took hundreds of photos which add to his story. He was promoted to Lance Sergeant before sailing for France.
As the invasion of France was imminent, Walt wrote his final letter, #133, to his parents, sharing his fear but also his hope for the future, and with a full understanding of the history of the moment, before signing off with a “cheerio” and “au revoir.”
Part of the D Day invasion, Walt survived the assault on the beaches on June 6, and three days later, doing reconnaissance on a motorcycle, had made it as far as a crossroads near Putot-en-Bassin, on the road from Bayeux to Caen, where he was shot and killed in battle.
His final burial was in Ryes War Cemetery near Bazenville, France.
Saturday, June 3rd, 1944,
B11194 – Lance Sergeant Dowden W.R.
No. 133, 12th R.C.A.

Dearest Mom & Dad:
I’m writing this week’s letter a day early, just in case I don’t get a chance to do any writing tomorrow.
At this time I find myself staring into space, wondering what I can write about, what I can say to you folks at home.  Much will have happened by the time you receive this. The radio & newspapers will burst forth with news of all the latest happenings, as the war goes on.
But the radio or the newspapers could not convey to you the thoughts I have at this time. I’m not sure that I can tell you what my thoughts are, or even that I want to tell you.
I am a part, however small, of a great force, which in the months to come will bring the war in Europe to a great and victorious conclusion.
You & I have heard of many chaps, who, under circumstances such as this, write very touching letters to be forwarded to their loved ones just in case. I must admit that I thought of it myself, but decided against it. Great things are in store for me, for us. I will speak only of myself, but what applies to me also applies to thousands like myself.  I am a part, however small, of a great force, which in the months to come will bring the war in Europe to a great & victorious conclusion.
It will be hard.  Yes, I realize that & am ready for it.  You may wonder if I am afraid. I have wondered about that myself, & have decided that if I do feel any fear, it must be overrun by other emotions such as curiosity, the will to fight & win, & many other things which I am finding awfully hard to put into words. I have had more than my share of joy & happiness, I have loved & been loved in return, my friends have been good & many, & my experiences in Life, altho’ they would not seem important to others, have to me been most pleasant & interesting.
Now, I am wondering what your thoughts are after reading my letter this far.  Have I been too practical, too outspoken? I don’t think so, for I have only spoken our thoughts.
It’s like this, Folks, Syd & I, along with all the rest have a job to do. We’ll do that job, & we’ll look after ourselves while doing it.  I know it won’t be easy for you folks back home, but we do ask you to keep smiling, & not to worry. Just carry on, as usual for us.
“Monty” himself says that we can beat Germany in six months. Think of that, just six months if all goes well.  Of the Canucks, “Monty” is quoted as having said “The only thing the Canadians will stop for, is to read their mail.” He can say that again!
I am sorry if this letter sounds rather “screwy,” & perhaps a little too outspoken. But it surely is a “screwy” world we are living in just now but give us just one more year, & we’ll straighten it out, this time, for good!
And now there doesn’t seem to be much left for me to say. Once again I ask you, all of you, not to worry too much, keep the Home fires burning, & with all of us lads over here, look forward, & hope & pray for that glorious day when we’ll all be together once again, happy, contented, & free to live our lives as we wish.
Keep the letters coming, ‘Gang’, & I’ll write whenever I get the chance. I’ll say “Au Revoir” for now, & until next time you hear from me, Cheerio, Cheri’s & damn it all, Keep Smiling!
God Bless You, Mum & Dad, – all of you.
Loads of Love, xxx…-Walt. xxx
x x xxxx