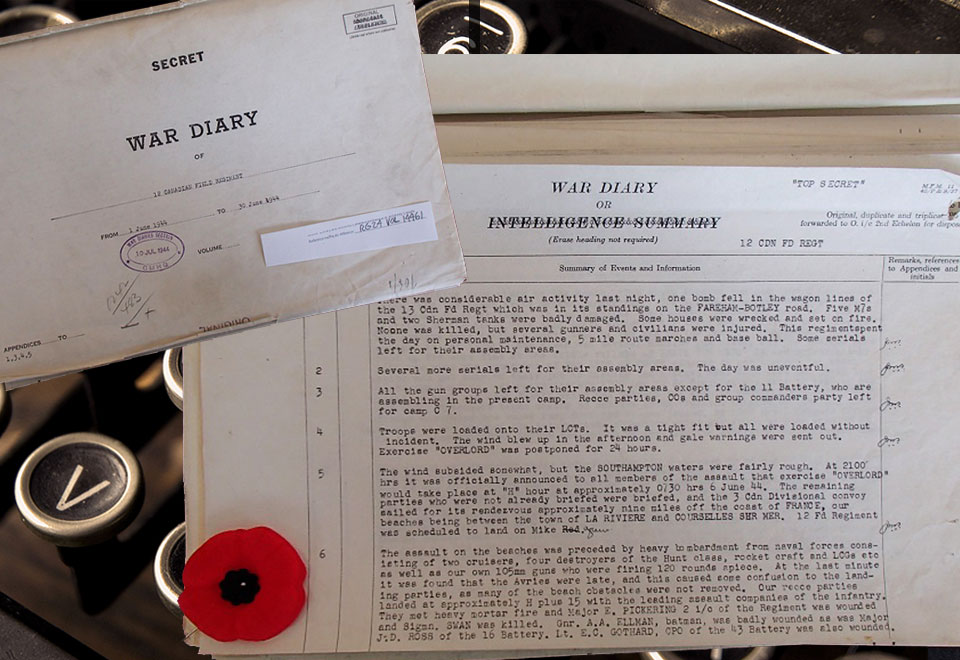 “This battle was the single most important battle on the Western front. DDay is the military codeword for the paratrooper operations on the night of June 5 and the beach landings on the morning of June 6 in Normandy. Canada’s 3rd Division led the way at Juno Beach supported by four regiments of field artillery plus an anti tank and anti-aircraft regiment. Three thousand, two hundred Gunners landed on D-Day, losing 17 officers and 40 other ranks. The Commander Royal Artillery of 3rd Division was Brigadier Stanley Todd, a First World War Gunner and a great hero amongst Canadian Gunners. On the morning of June 6, 1944, it was cloudy and pouring rain. The tide was low, and thousands of soldiers from America, Britain, Canada, and many other countries were prepared to storm the beaches. The battle was going to be fierce, and thousands of men would lose their lives fighting.

Before the infantry landed on the beach, all artillery launched a saturation barrage against the enemy defences. Destroyers pounded the beaches, large landing crafts fired their 4.7-inch guns and Landing Craft Tanks fired rocket rounds. Four field artillery regiments of the Royal Canadian Artillery, in all 96 guns of 105-mm, embarked on 24 LCTs, moved toward the beaches simultaneously.

Lt.-Col. Webb brought the guns of the 12th Field Regiment ashore and put them into action on the beach. The artillery was deployed side by side amid the confusion of men and vehicles, and then opened fire in support of the advancing infantry.

The ever-increasing number of troops and vehicles on the beach made circulation more difficult. To solve the problem, Royal Corps of Engineers personnel opened up breaches in the seawall protecting the beach. The fighting moved inland. As D-Day drew to an end, Canadians had succeeded in advancing quite deeply towards Creully, Colomby-sur-Thaon and Anisy, short of their assigned targets but far enough to make the operation a definite success. The Canadian Artillery contribution to the Liberation of France was significant – nine field regiments and three medium regiments (almost 300 guns), and several anti tank and anti-aircraft regiments (350 guns). A total of 17,000 Gunners. About 2,000 Artillerymen were killed or wounded in the liberation of France.”

“About 0630 hrs the LCT’s deployed for the firing run-in and at 0715 the blue flag broke out at the masthead of our ML. Everyone forgot his sea sickness for this was it! Our ranging rounds required only a small correction before our fire plan began.  There were no “hitches” and as we approached the shore we saw our rounds landing.  The whole beach seemed a raging inferno; – fighters and fighter-bombers were strafing and bombing.  Destroyers and cruisers were bombarding the beaches, four Regiments of Artillery were firing, plus the devastating closer support weapons, Landing Craft Rockets and Landing Craft Guns.  Nothing had been left out and it was impossible to comprehend this vast picture.  From the sea it looked as if the whole area would be a completely pulverized and annihilated by the time we arrived.  We earnestly hoped so!

Actually many of the defences escaped damage but it was our first taste of power and at the time the bombardment felt and looked very impressive.  The Regiment fired approximately 150 rounds per gun and on our first run in closed to 3000 yards from shore.  Shells landed all around our craft and in front LCA’s were being blown up in mines.  ….. “

Into Action with the 12th Field, written by Lt.Col T.J. Bell