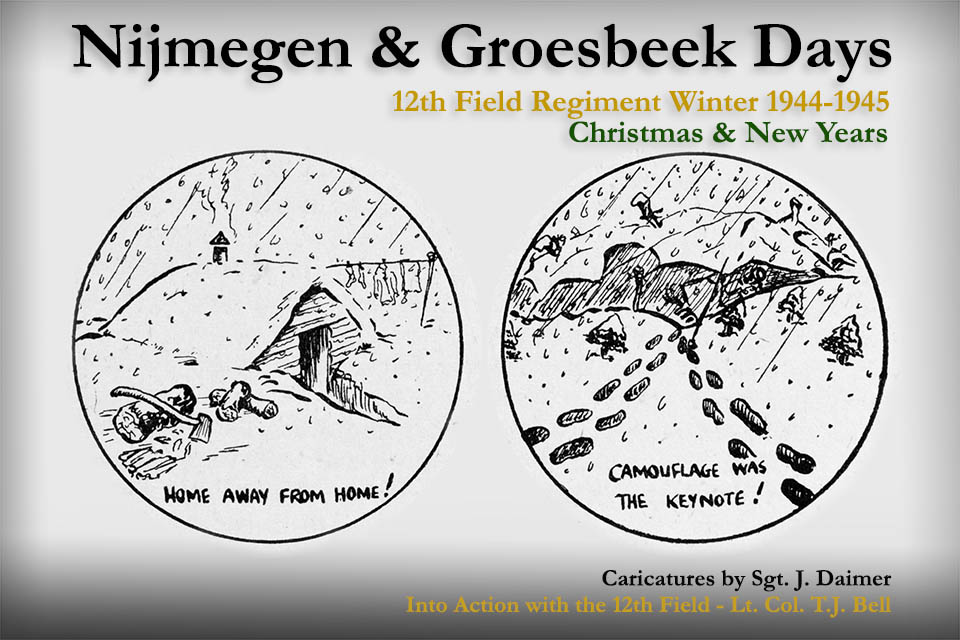 It was a cold winter for the troops during the Christmas & New Years 1944-1945. On the sixth year of the War, Lieutenant Colonel Roland Webb extends his compliments of the season to all ranks of the Regiment quoted in Lieutenant Colonel T.J. Bell’s “Into Action with the 12th Field”, from the war diaries.

On New Years Day 1945, there was a good deal of air activity in Groesbeek & Nijmegen, Netherlands area where the 12th Field Regiment had taken shelter for the most part of the Winter. “The raid served to remind us that there still was a German air force capable of striking a heavy blow and that camouflage and concealment still remained principle factors in our war.”

The Officers had a mess dinner December 24th and sharp on the stroke of midnight we presented our enemy with a lovely Christmas present consisting of a salvo from twenty four guns to be followed by nineteen others during the night. The 43rd and half RHQ had their dinner the next day and with a proper interval to allow recovery and the other Batteries also had their Christmas festivities. They were all great successes; the food was plentiful and the jug never empty!

On December 26th the 7th Brigade took over from the 4th Brigade who went into Corps Reserve. We took over the 4th Field Regiment’s area about a mile to the east and it didn’t take us long to move. Lt-Col Webb had gone back to England the day before Christmas and we heard that day that he had been awarded the DSO.
The position required a tremendous amount of cleaning up and this kept us extremely busy for a few days. The weather was greatly improved — clear and cold and we did a considerable amount of firing. New Years Eve passed without any “official” incidents.

The Winnipeg Rifles had in an excess of good will sent a forty gallon keg of wine to the 11th Battery and this provided a good deal of festive spirit. A disinterested onlooker might have thought things were a bit out of hand. However, firing went on throughout the evening and New Years Day itself, giving the Germans no time to relax, or feel that “Peace on earth” etc. had any place in our hearts as long as they remained unbowed before us.
New Years Day there was a good deal of air activity. We didn’t discover until later that the Luftwaffe had made a final effort to crush our air superiority. It was abortive although some fields were caught napping and had many planes destroyed on the ground. The raid served to remind us that there still was a German air force capable of striking a heavy blow and that camouflage and concealment still remained principle factors in our war.
The air OP’s fired our guns every now and then and we fired a good deal in support of the local attacks on our front. These attacks were primarily to capture prisoners because it was very important that the Units on the opposite side of the fence be identified. The big attack was to go through our front and enemy strength and dispositions had to be positive.
The 6th CAR used one of our OP’s, the windmill at Groesbeek to fire their 75’s indirectly. They used rough but ready methods but certainly got good results. The fire power of a Tank Regiment was very impressive and their guns were used later to thicken up the fire plan for the assault through the Seigfried Line and also across the Rhine. Field Marshall Montgomery’s idea of a fire plan finally got to the stage where every gun from the nine inch heavies to the piat participated.
A new procedure for counter Battery fire on enemy mortars came out early in January and was aptly named “Smort” bombard. The technical work involved was fairly tricky but we had managed to obtain a very high standard of efficiency throughout operations despite the great turnover of Officers. So “Smorts” became just another target and we continued to report “ready” to Division on them before our rivals.