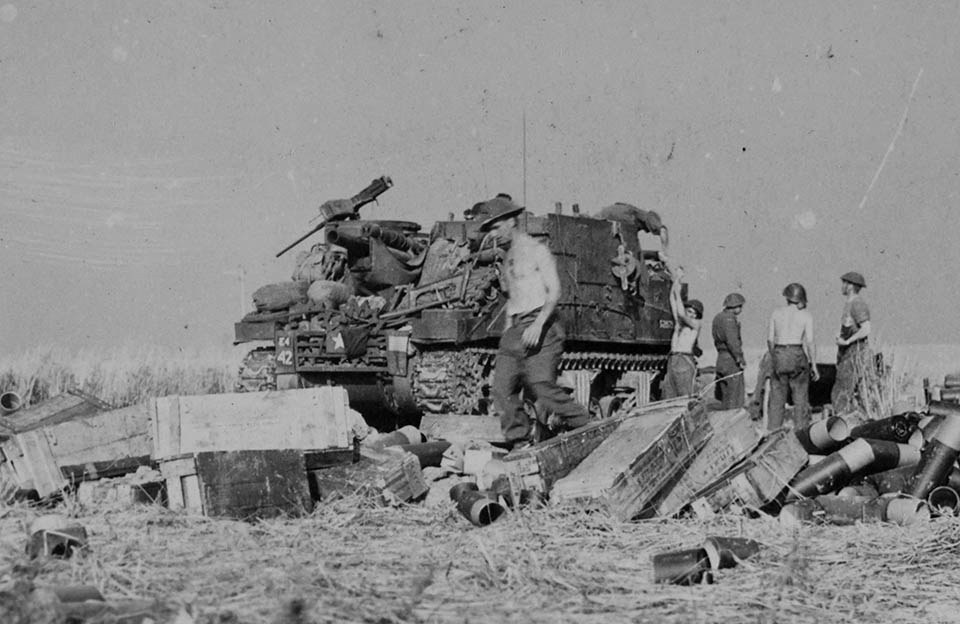 The 8th Brigade had resumed their position in reserve of the 7th and 9th Brigades. Our FOO ‘s were recalled leaving one OP out with the 9th Brigade. A great deal has happened during the month of June — this Regiment has been active throughout. July will undoubtedly see even greater advances and with the experience we have gained during this past month, we are prepared to do our part with confidence and determination.”

On July 1st the Regiment was visited by Lt-General Crerar 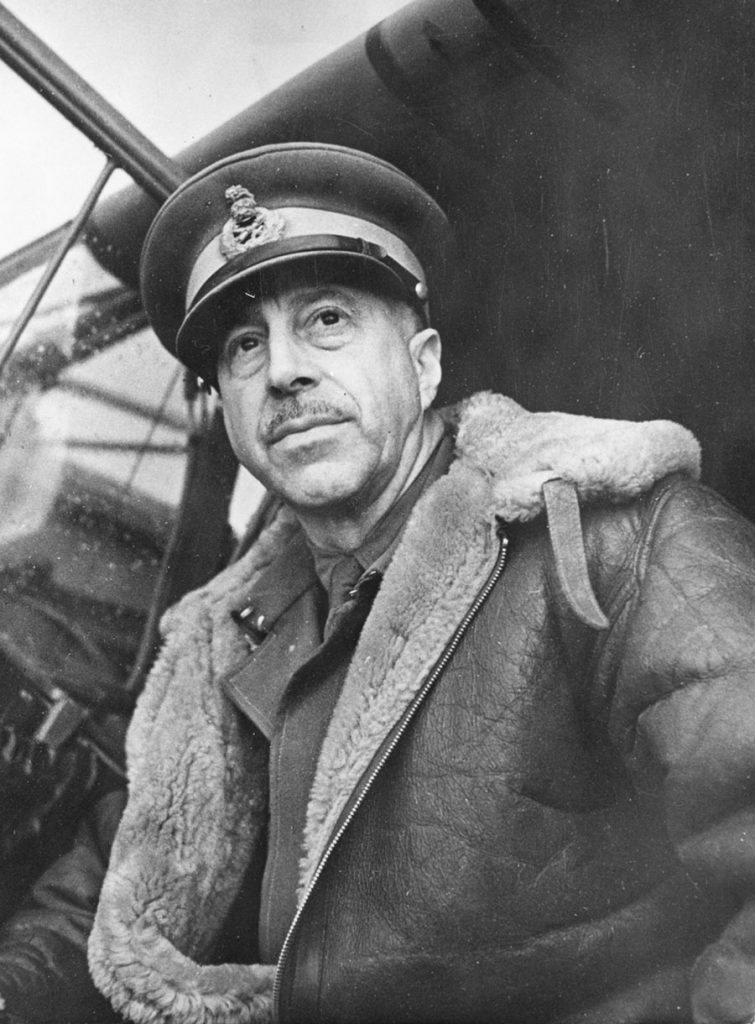 who wandered around the gun positions and spoke informally to the men. He confirmed the rumour that we would be losing our SP’s for towed 25-pdrs, much to everyone’s disgust. We had developed an immense fondness for our “Priests”. Lack of camouflage and mobility were the two main points the General had against the use of the SP and all our arguments to the contrary net little success. There was little firing during the day as we had only one OP out; a bit of course shooting and a few “Victor” targets. There was a small stream near RHQ and the Corps Mobile Bath was in the area so cleanliness was the order of the day.
The next day the guns reverted to the use of the 7-A dial sight and it didn’t take long for the Gunners to become familiar again with their old friend. The opportunity soon arose for extensive practice as on the morning of July 4th the 8th Brigade with the Winnipeg Rifles attached attacked Car-piquet Airdrome and village. The Regiment had two CO’s Reps out and five FOO’s and fired a heavy barrage at 0500 hrs in support. The fighting was very heavy and although the 8th Brigade managed to get a good foothold in the village the Winnipeg Rifles were forced back twice from their position on the Airdrome itself, to Marcelet. An extract from the War Diary gives a terse description of the day — “At 0500 hrs the Artillery barrage started and was reported as satisfactory. Progress was steady in spite of small arms and light Artillery fire encountered. By 0630 hrs forward troops were reported by our F00’s to be in the village of Carpiquet. By 0830 hrs the objective was captured and Units were reorganizing. During this period and subsequently the objective was heavily shelled by the enemy. Enemy attempts to counter attack were quelled by our own Artillery concentrations. The end of the day saw our troops in full possession of Carpiquet although they were continuously pounded by enemy Artillery and mortar fire. The Winnipeg Rifles, who had been in possession of the southern hangars twice had to withdraw to Marcelet. During the afternoon several planes flew over and one was brought down by ack-ack. Gnr Clarke was wounded by shellfire, casualties suffered by the FOO’s and their parties included…. (p.57) 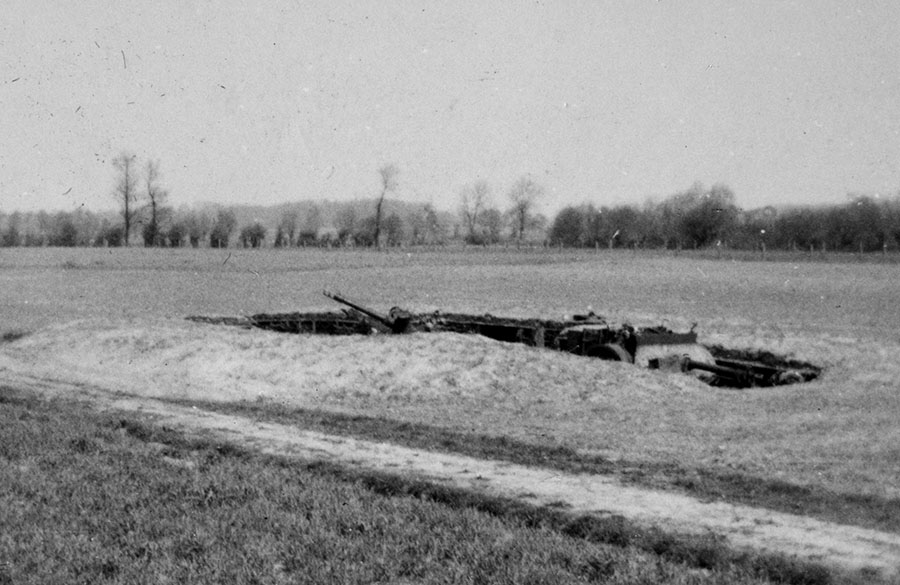 Capt W. B. Nixon’s log for the day gives a more personal account of the fighting — “At 0500 hrs went forward with the North Shore Regiment under barrage. The enemy laid down counter fire with mortars and guns using smoke and HE. Infantry- casualties amounted to approximately forty percent. Very few prisoners taken. Reached objective at 0800 hrs. Layed on OF-SOS task for C Company. Enemy commenced mortar fire on Carpiquet at approximately 0900 hrs. Occupied OP, town empty, even of dead, but very battered. Enemy mortar fire increased during day, six.barrelled rocket guns being used. Fire of this weapon, the “Nebel-werfer”, very shattering to nerves and morale but did not cause many casualties. Enemy activity on high ground north and east of village engaged with troop. Germans put in a counter attack proceeded by Fifteen minutes intense mortar and gun fire. Attack ,held by machine gun and DF fire, At first light July 5th, tanks attacked and were repelled by anti-tank fire and DF Tasks losing three tanks. RAF gave excellent support during the day with Typhoons, Spitfires.and medium bombers.”

A great deal of credit should go to the line crews who did a wonderful job of keeping communications open to Carpiquet village on the day of the attack and on subsequent days. The only route open was under enemy observation and everyone who stirred brought down mortar and shellfire. The line had to be laid along the road and the heavy fire knocked it out continuously. Sjt. Mercer and Gnr Robertson were killed, and Gnrs Cooper (who later died) and Kennedy were wounded while endeavouring to keep the line open and it was one of the hottest spots the Signallers ever had to contend with. However, by the 6th the situation was fairly normal and the next phase began to take shape. Carpiquet commanded the eastern approach to Caen and it was necessary to hold it before the assault on the town itself. The attack on Caen scheduled for the 8th of July was to be done by the 3rd Canadian Division, the 59th British Division, and the 3rd British Division and in addition to the normal Divisional Artillery support…..
(p58 ) 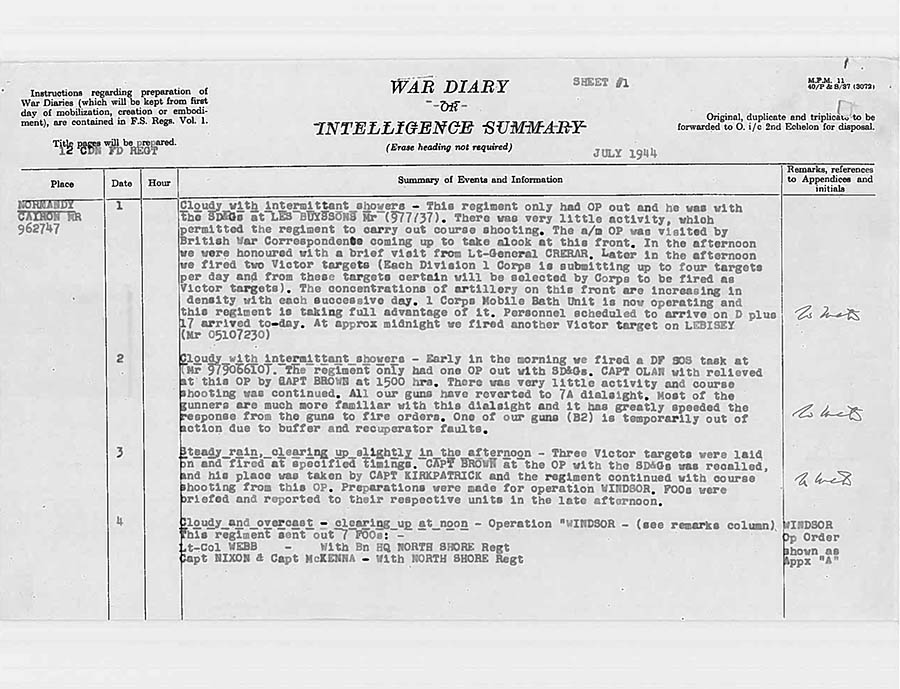 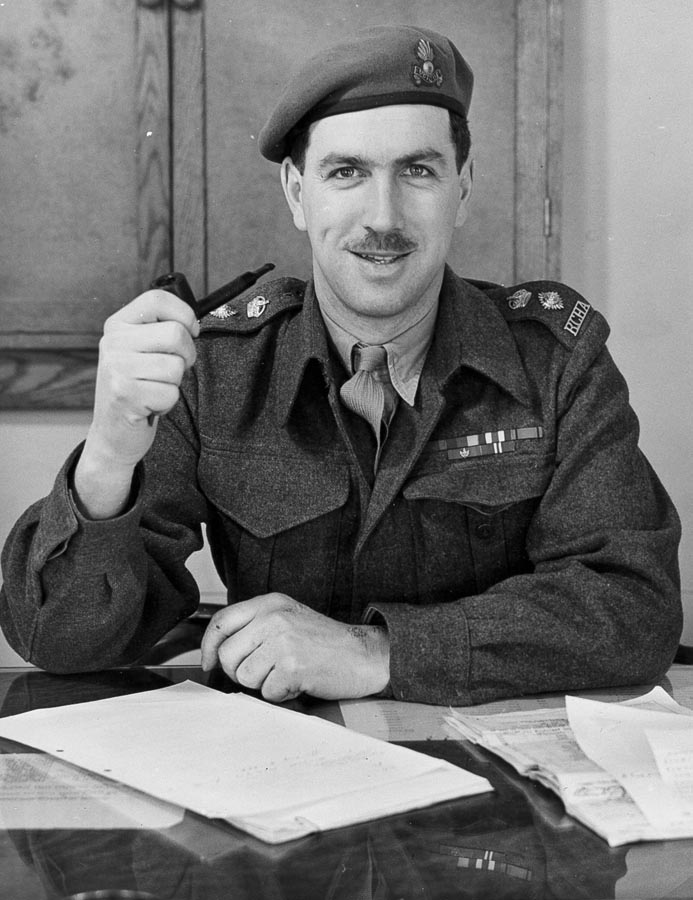 satisfaction with the performance of the 105 mm SP gun. A single round gives a greater ‘crump” than a 25-pr. The eqpt itself offers better protection to the gnrs, and there is no need to dig in as deep as with tractor-drawn eqpts. One disadvantage, which has not been found troublesome, is that for large switches, the whole eqpt must be started up and slewed, a slower process than with the normal gun.

It had not been expected that four complete regts would still be firing the 105 mm. Eqpt cas were anticipated to be so high that by now (23 Jun) it had been thought that at least one 25-pr regt would exist. But such had not been the case. 12 Cdn Fd Regt has had no gun cas, and there is no immediate prospect of any regt reverting to 25-prs. 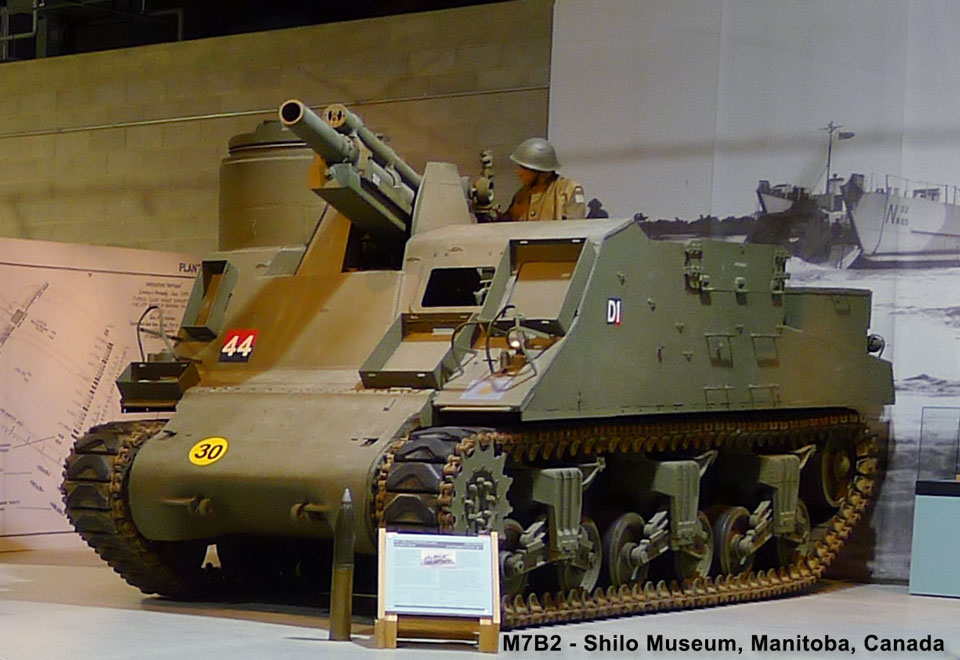 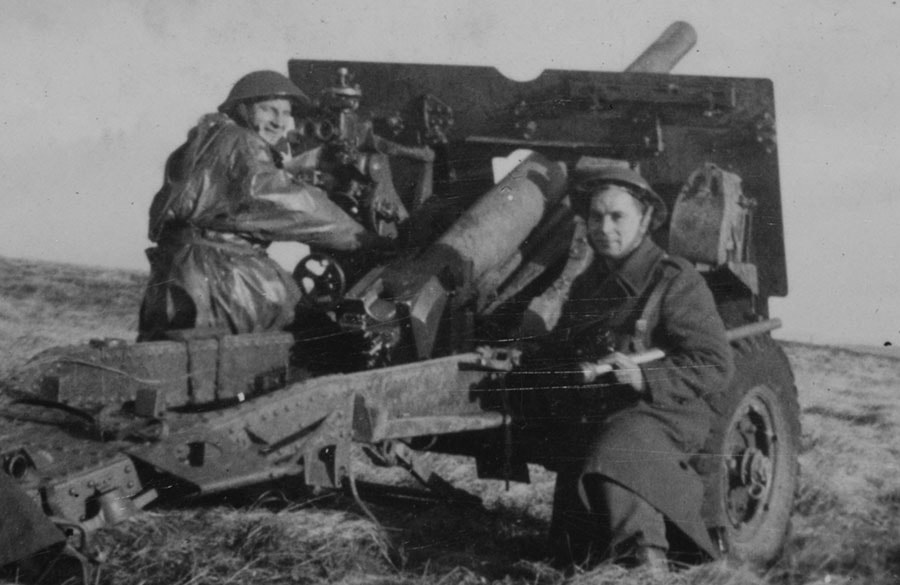 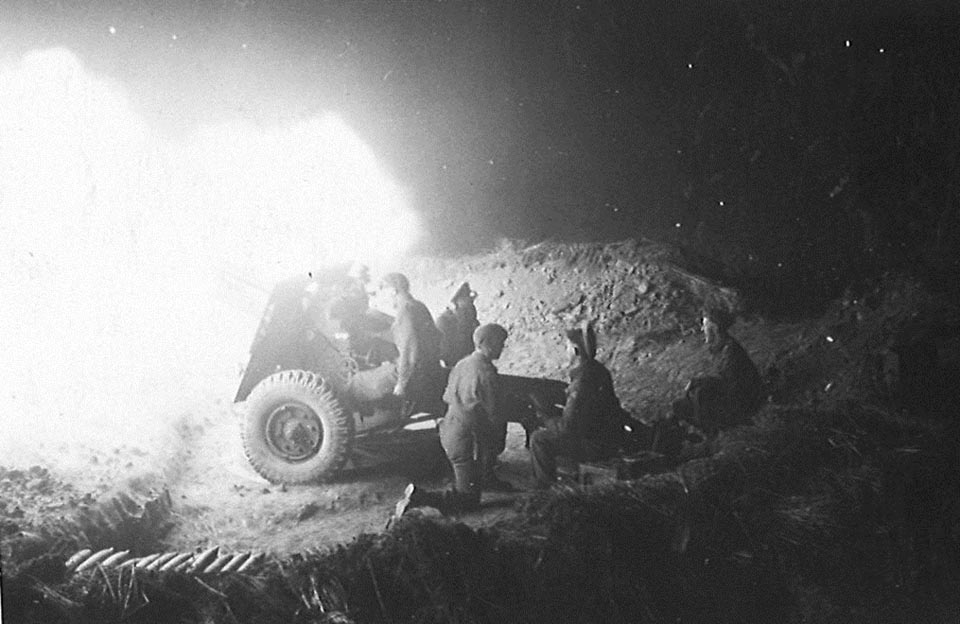 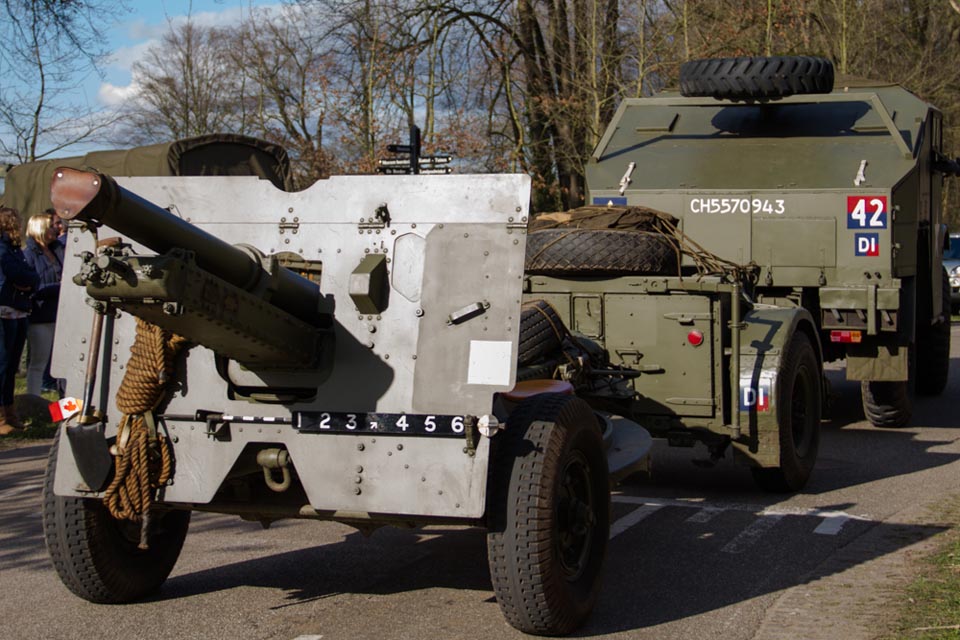 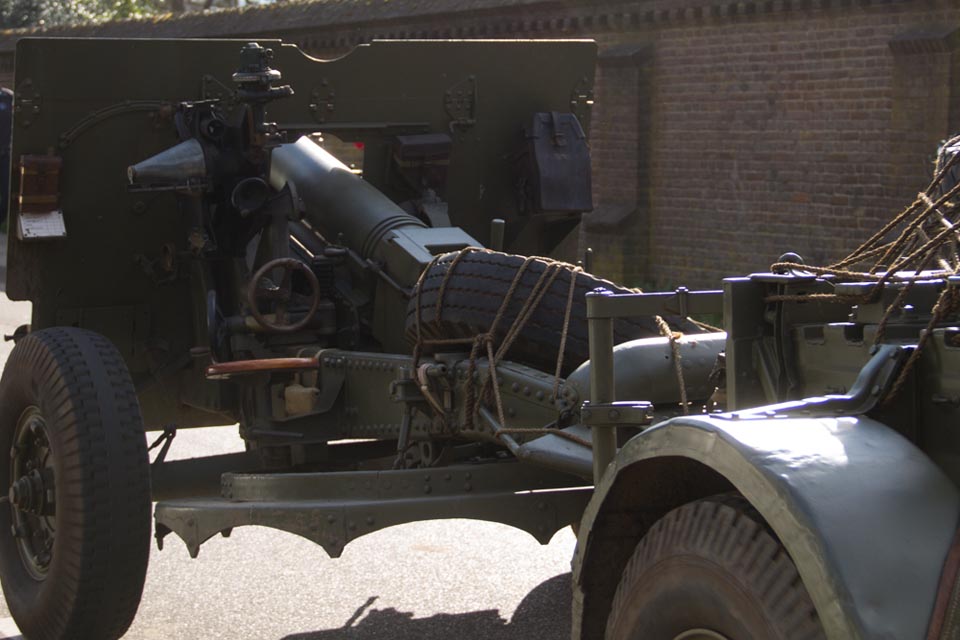