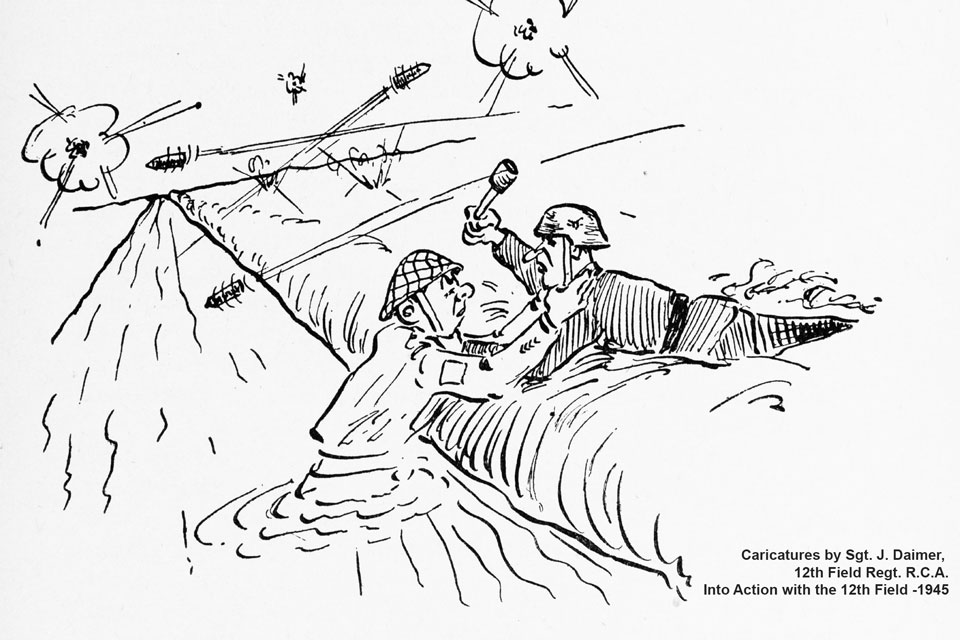 Excerpt from Into Action with the 12th Field – LT. T.J. Bell

” This operation across the Leopold Canal in the Scheldt Estuary was one of the toughest the Infantry had to fight. Essentially it is the story of the Infantry as our role was a particularly easy one. 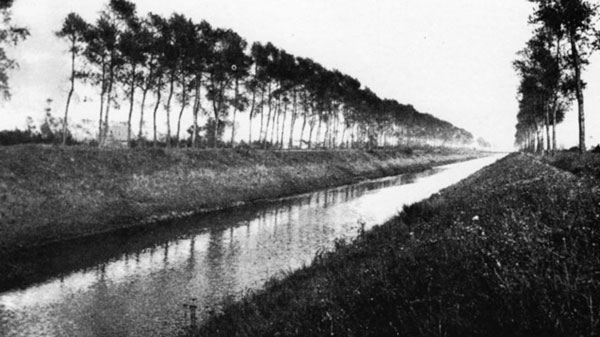 The 64th German Infantry Division together with the permanent coastal garrisons were denying us the use of the port of Antwerp by dominating the Scheldt Estuary. Our job was to clear the area as quickly as possible. We needed Antwerp badly as a port, for the tremendous quantities of supplies required to mount our offensive in the Reich itself.

The Regiment moved from Calais on October 1st to a concentration area and spent a quiet night. The Divisional Artillery moved the next day to Poperinghe in Belgium. Strict security measures were taken — all Divisional and Unit markings were obliterated and the Division concentrated in an area to provide deception. The Hun was to think the Division was concentrating prior to an assault on the German garrison still holding out in Dunkirk. Even our Division patches were taken off but on October 3rd when we moved through Ypres to Maldegem we found to our surprise 3rd Division route markings on the roads. The deception evidently did not apply to the Provost Corps. 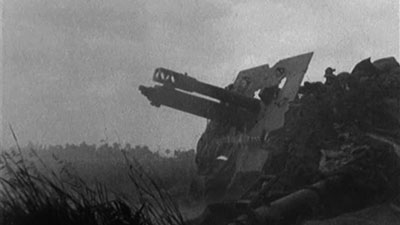 We took over the gun position of the 15th Canadian Field Regiment and came under command of the 4th Armoured Division for a few days.

Operation “Switchback” began at o33o hours October 6th. The 7th Brigade with the Canadian Scottish Regiment and the Regina Rifles up, assaulted across the Leopold Canal with flame throwers and Artillery support. Very heavy fighting followed and the Germans reacted very strongly. At the end of a day our troops had a narrow bridgehead two hundred yards deep but the fighting was at such close quarters that it was difficult for our FOO’s to do any shooting. There was a mile gap between the Battalions that could not be winked out but at 0155 hours the next morning the Winnipeg Rifles crossed to consolidate the Brigade position and managed to link it up. On October 7th DF targets were fired innumerable times in support of the Regina Rifles who were being counter attacked. “ 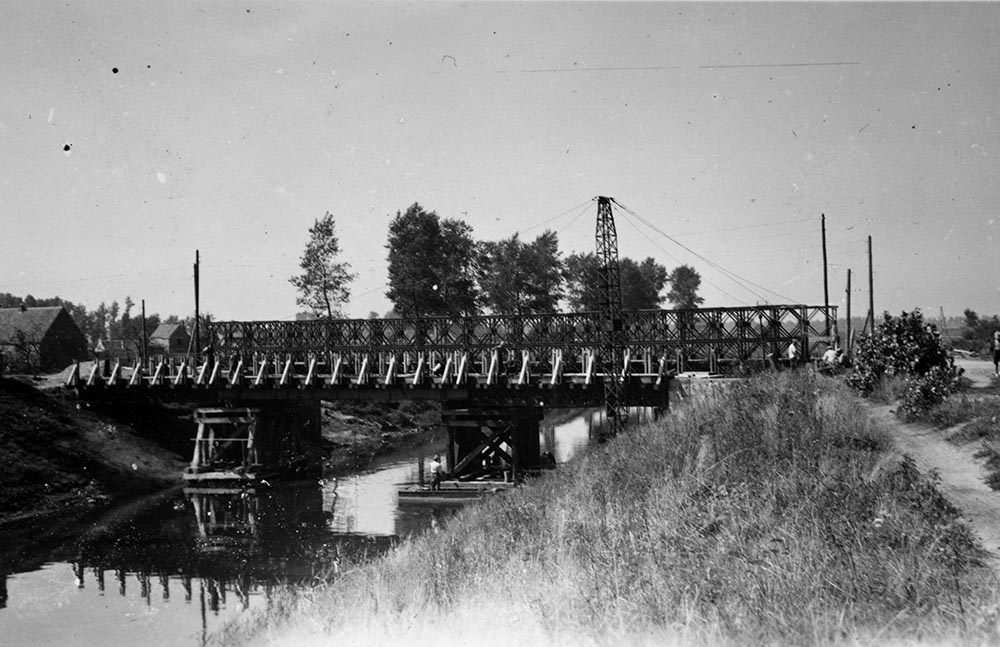 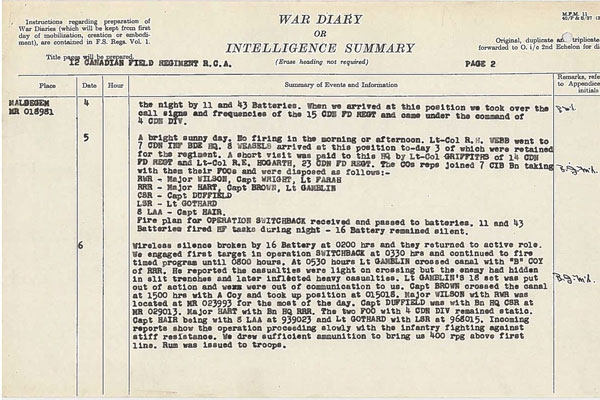 WAR DIARY October 6th, 1944:
Wireless silence broken by 16 Battery at 0200 hrs and they returned to active role. We engaged first target in operation SWITCHBACK at 0330 hrs and continued to fire timed program until 0800 hours. At 0530 hours Lt GAMBLIN crossed canal with “B” COY of RRR. He reported the casualties were light on crossing but the enemy bad hidden in slit trenches and later inflected heavy casualties. Lt GAMBLIN’S 18 set was put out of action and we were out of communication to us. Capt BROWN crossed the canal at 1500 hrs with A Coy and took up position at 015018. Major WILSON with RWR was located at MR 023993 for the most of the day. Capt DUFFIELD was with Bn HQ CSR at MR 029013. Major HART with Bn HQ RRR. The two F0O with 4 CDR DIV remained static. Capt HAIR being with 8 LAA at 939023 and Lt GOTHARD with LSR at 968015. Incoming reports show the operation proceeding slowly with the infantry fighting against stiff resistance. We drew sufficient ammunition to bring us 400 rpg above first line. Rum was issued to troops. 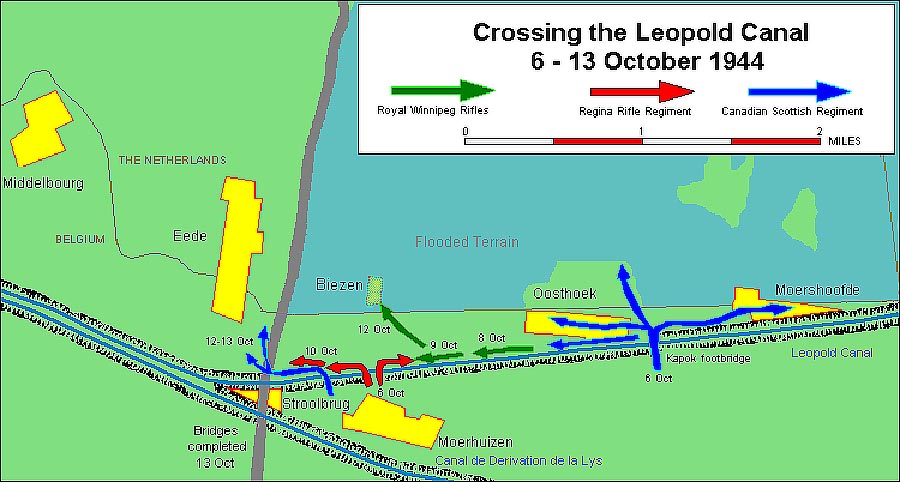 Wikipedia >> Battle of the Scheldt