OP Block Buster ~ Hit a block and serious one 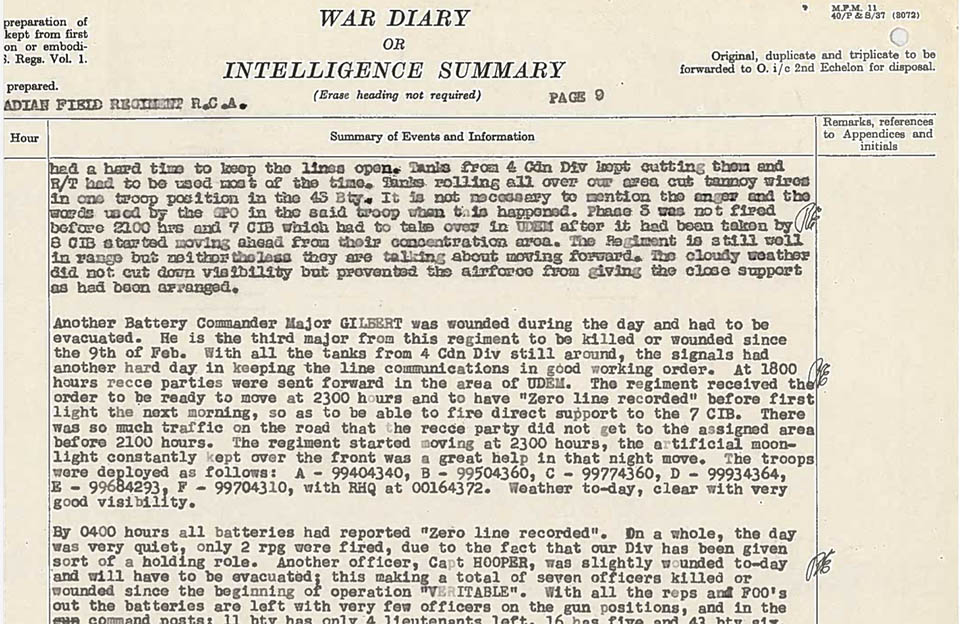 February 25th, 1945 saw operation “Blockbuster”. The objectives were to finish off the Seigfried Line and the 3rd Division’s job was to take Udem.  The attack was successful and Udem was taken.  Major A.T.P. Gilbert and Capt. E.J. Hooper of the 16th Battery as FOO’s with the Regina Rifles were wounded.

…..provide the essential link up between our Army and the 9th US on the west bank of the Rhine.
A pause was an absolute necessity now to regroup and plan the final drive. The next Operation was to be known as “Block Buster” and it was aptly named as we had definitely hit a block and a serious one. The objective was to crack the third line of defense of the Seigfried Line and the 3rd Division’s job was to taken Udem.
February 25th saw the briefing for “Block Buster”, the FOO’s and Rep’s left for the respective Battalions and the fire plan was received. Zero hour for the 3rd Division was the next morning at 0330 hours and we fired in support two hundred and thirty rounds per gun before 1400 hours. The Signallers had a difficult time keeping their lines in, as the 4th Armoured Division tanks were milling around our position all day and even the tannoy wires were ripped up.

The attack was a success, Udem was taken and on the 27th Recce parties proceeded to the town. The traffic on the roads was terrific and the Recce party did not get to the town until 2100 hours. However, there was the usual artificial moonlight that had aided us since operation “Totalize” and the Regiment moved at 2300 hours.
Major A. T. P. Gilbert and Capt E. J. Hooper of the 16th Battery were both wounded that day by mortar fire with the Regina Rifles. That brought the officers killed or wounded since February 8th to seven which compared to our first three days of fighting in Normandy.
By 0400 hours the z8th of February zero lines were recorded and as the Division was now in a holding role it was a fairly quiet day for the Regiment. Everyone was able to find cover of one sort or another and the position was not quite so crowded.
The next day we fired a fire plan for the 11th Armoured Division. They went through the 9th Brigade at Udem heading south but got only a short distance. They lost most of their tanks as it was impossible to manoeuvre of the roads due to the mud and a heavy anti-tank screen knocked of everything on the roads. A shell lit in a 43rd gun pit killing Bdr Lind and injuring ……

Feb. 25: This morning Major A.G. Goldie, 2 i/c, and Capt D.H. COOPER, Adjt went to an °O ‘Group at Div Arty in preparation of operation BLOCKBUSTER. In the afternoon Capt J.C. DUFFIELD was sent to 11 British RA as special SCRs Rep for 3 Div. and Capt J. DACK went to 2 Cdn Div for the same purpose. Their sets will be an CRAs Command Net. At 1530 hrs on RC mass in RHQ Officers Mess. Protestant padre H/Capt E.E. BRANDT still being on leave so there was no Protestant Church Service. Early in evening we received a fire plan for Op BLOCKBUSTER. The min objective of this operation is to crack the 3rd line of defense on the SIEGFRIED LINE in front of us. Principle roll of 3 Cdn Inf Div is to take the town of UDEM. 260 rpg only have boon allotted to the Regiment for this operation. During the night Major A.G. GOLDIE went to 7 CIB as CRAs Rep, and Major D.M. WILSON, OC 11 Fd Bty came to RHQ as A/21/c. The weather remains fairly good. It Is mild with low clouds and with little rain once every five or six hours, thus the visibility is not good. COs Reps and FDOs we also sent to-night to te three Brs of 7 CIB.

Feb 26th: At 0330 hrs the Regiment fired on phase 1 of fire plan BLOCKBUSTER and while the 2 Cdn Div went ahead with little resistance, 8 CIB had to put up a stiff fight to reach their first objective. Phase 2 was fired at 1400 hrs, and by that time the Regiment had expended 260 rpg. Al1 night last night and all day to -day the signallers ….

Feb. 26: had a hard time to keep tho lines open.Tanks from 4 Cdn Div kept cutting them and R/T had to be used most of the time. Tanks rolling all aver our area cut tannoy wires in one troop position in the 43 Bty. It is not necessary to mention the enemy and the words used by the GPO in the said troop when this happened. Phase 3 was not fired i before 2100 hrs and 7 CIB which had to take over in UDEM after it bad bean taken by 8 CIB started moving ahead from thoir concentration area. The regiment is still well in range but nevertheless they are talking about moving forward. The cloudy weather did not cut down visibility but prevented the airforce from giving the close support as had been arranged.

Feb. 27: Another Battery Commander Major GILBERT was wounded during the day and had to be evacuated. He is the third major from this regiment to be killed or wounded since the 9th of Feb. With all the tanks from 4 Cdn Div still around, the signals had another hard day in keeping the line communications in good working order. At 1800 hours recce parties were sent forward in the area of UDEM. The regiment received the order to be ready to move at 2300 hours and to have “Zero line recorded” before first light the next morning, so as to be able to fire direct support to the 7 CIB. There was so much traffic on the road that he recce party did not get to the assigned area before 2100 hours. The regiment started eying at 2300 hours, the a artificial moon-light constantly kept over the front was a great help in that night move. The troops mere deployed as follows: A – 99404340, B – 99504360, C 99774360, D 99934364, E – 99684293 F – 99704310, with RHQ at 00164372. Weather to-day, clear with very good visibility.

Feb. 28: By 0400 hours all batteries had reported “Zero line recorded.. On a whole, the day was very quiet, only 2 rpg were fired, due to the fact that our Div has been given sort of a holding role. Another officer, Capt HOOPER, was slightly wounded to-day and will have to be evacuated; this making a total of seven officers killed or wounded since the beginning of operation “VERITABLE”. With all the reps and FOO’s out the batteries are left with very few officers on the gun positions, and in the gun command posts; 11 bty has only 4 lieutenants left, 16 has five and 43 bty six. The 1st Radar Battery has established a post beside 43 Battery and is using our telephone lines. In this new position all the men were able to find sleeping accommodations in some houses or barn, after H11 the rounds fired by the artillery on ….. 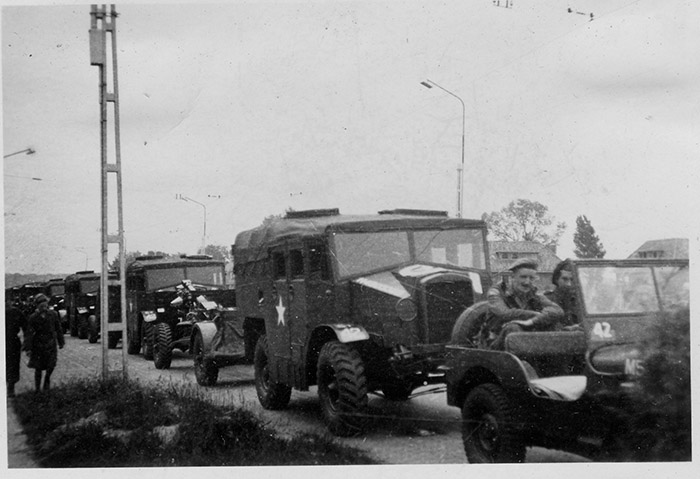