“May they be watching now from on high” 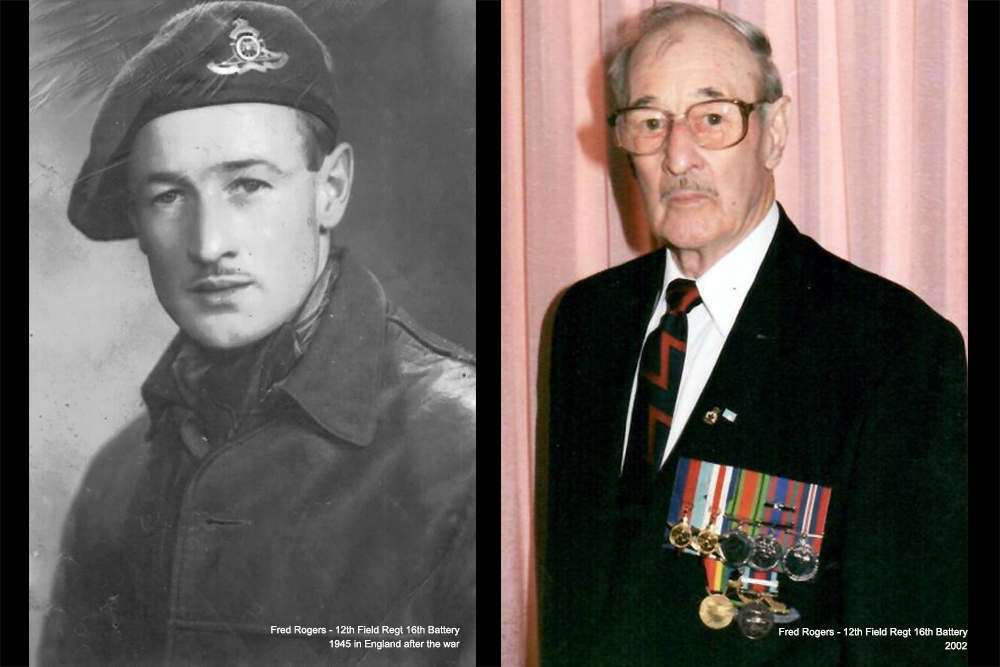 Rogers was 82 years when he made his fourth travel to Normandy Coast of France for the official opening of the Juno Beach Centre on June 6th, 2003.
He was first there in 1944 as Canadian soldier of the 12th Field Regt. R.C.A., part of the Allied D-Day invasion force. He returned in 1984 for the 40th anniversary of D-Day and again in 1994 for the 50th anniversary.

Doreen Hertel writes:
Fred said a prayer, on his visit to Normandy, June of 1984.  They asked him to lead with the singing, he made a toast first; then he led the people in the bus with singing.  “Here’s to those who didn’t make it – May they be watching now from on high, and with this toast, we guarantee them, that their memory will never die.”

Doreen continues…
“I write and send you these pictures as a celebration of Fred Rogers life.
He returned from the Second World War to Bournemouth, England, married Penny. She died the following year having surgery, due to having been in a bus when a bomb hit and was blown out of the bus; to war shock, as soon as they did surgery, her heart could not take it.

He re-married in the 1952’s to Anne Humphreys. Fred had no children. When his mother died, my mother and I were the only remaining relatives of his.

I can reflect one a couple of things my Uncle said; he did not swim and upon getting to Juno he had to jump up and down to get on land; as he got on land one of the soldiers’ that had his arm shot, asked him to take his watch off and put on the other hand. He didn’t talk about a lot of things with me and I know they met once a month at the armoury to be with the survivors and helped them cope with the tragedies they survived.

He was selected to be interviewed by the legal profession in Canada about the war; how proud he was to be selected. His tape is in the War Museum of Canada.

He went to many organizations and schools to talk about his service and presented them with a copy of this tape. In his last years, his neighbours, which I never knew, helped him get his uniform on.

I was very delighted to receive a call from you in reference to get pictures from my Uncle’s service in World War II.  Also attached pictures of his father returning from World War I.”

Special thanks to Doreen’s son, Robert Chernesky, who helped to get all the pictures scanned and fine-tuned for this article.